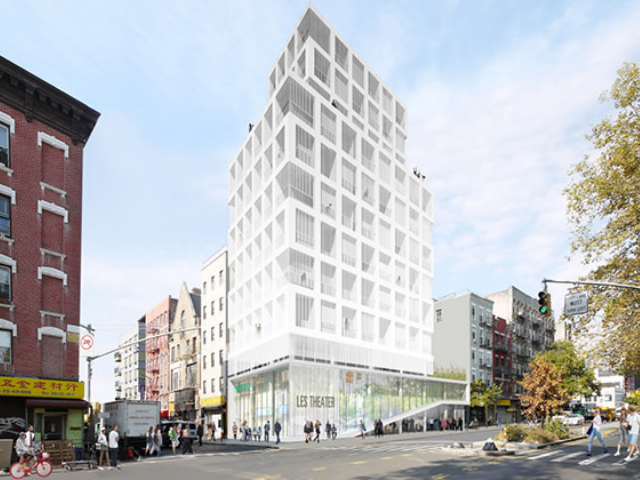 For this afternoon’s reveal, YIMBY has unearthed renderings of a mixed-use building on the Lower East Side, from the website of Leven Betts, a husband-and-wife architectural practice based in West Chelsea. The images show a boxy, stark white structure at the corner of Chrystie and Broome, overlooking the narrow and very well-used Sara D. Roosevelt Park. If the project comes to fruition, it would represent yet another step forward in the revival of the Bowery (which is just on the other side of the block) and the Lower East Side, bringing another piece of high design to a neighborhood that was once one of the world’s most infamous slums.

The building would reach what appears to be nine stories and contain 35,000 square feet of floorspace, according to the architects’ website, on a double-wide tenement lot. It would contain only 16 apartments, with the remainder of the space taken up by “a downtown dance company’s theater, rehearsal space and offices.” The residential tower atop the base would be slightly askew from the city’s street grid, but would line up perfectly with the compass (or solar grid, hence the building’s name), with each side directly angled towards a cardinal direction. The architects’ website puts the groundbreaking in 2015, though no building permits have yet been filed. Trevor Stahelski is the developer, Robert Silman Associates is the structural engineer, and Arup is the façade consultant.

Talk about this project and more on the YIMBY Forums