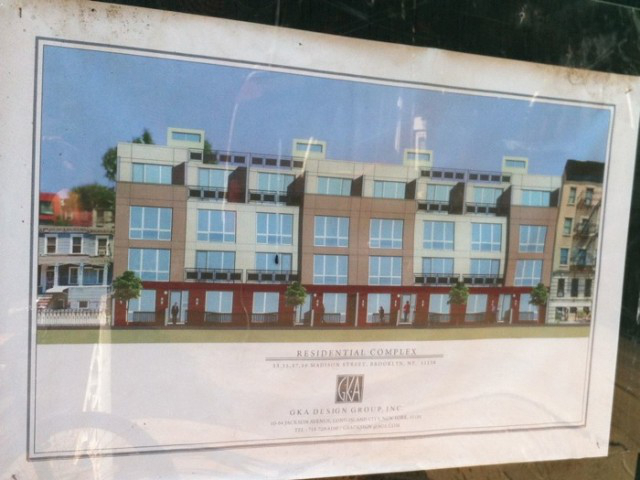 79-36 Cooper Avenue [Queens Courier]: The Hansel N’ Gretel meat processing plant has recently closed in June, and now the owners are planning on selling the site; manufacturing equipment will be auctioned off in September. Reportedly, the two-acre parcel is located in an industrial zone, but the broker “advertised it as a ‘multi-purpose’ plot.”

31-33 2nd Avenue [EV Grieve]: Construction is nearing completion at 31-33 2nd Avenue — in the East Village — where Ben Shaoul is developing a six-story and 12-unit mixed-use building, with ground-floor retail. The building has been clad in a darker-toned grey brick, which has proved slightly unappealing.

760 Madison Avenue [The Real Deal]: SL Green Realty has purchased the land under the four-story building of 760 Madison Avenue — on the Upper East Side — for $282.4 million. “The acquisition gives [the developer] a freer hand to redevelop the site,” although Armani’s current lease is not due to end until 2025.

101 Delancey Street [Commercial Observer]:  The six-story building at 101 Delancey Street — in the Lower East Side — has been sold to an anonymous LLC for $17.3 million. The building currently houses 20 units and ground-floor retail, but the site abuts Essex Crossing — a large-scale redevelopment of multiple blocks — signaling possible redevelopment; plans for the new building have yet to be revealed.

173 Green Street [Brownstoner]: A four-story and seven-unit residential building is being erected at 173 Green Street — in Greenpoint — and steel-frame construction has topped-out. The site’s predecessor was a one-story retail structure, long plaguing the street front; on-site renderings reveal a busy design produced by Nataliya Donskoy. Façade installation is imminent.

1575 York Avenue [Commercial Observer]: In another acquisition, an anonymous buyer has purchased two, five-story tenement buildings — at 1573-1575 York Avenue, in Yorkville — for $11.75 million. The buildings contain 18 rental apartments, and the marketing agent discussed “a tremendous amount of interest from both developers and multifamily investors.” Plans for the site remain undisclosed, but potential is large.

2015 5th Avenue [NY Daily News]: Long vacant for decades, the corner lot of 2015 5th Avenue — in Harlem — finally looks ready for development. Owner David Israeli plans to “build a four-story residence with commercial space on the ground floor by early 2016.” Back in the 90’s, Israeli had demolished an existing structure to make way for redevelopment, but plans fell through; specifics have yet to be revealed.