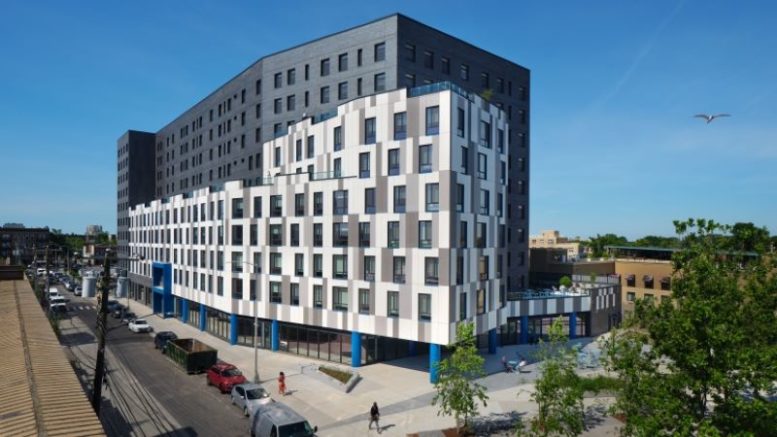 Construction is complete on Beach 21, a ten-story affordable housing building at 10-47 Beach 21st Street in Far Rockaway, Queens. Developed by The Community Builders with support from New York City’s Economic Development Corporation, Department of Housing Preservation and Development, and Housing Development Corporation, the structure yields 224 units reserved for New Yorkers earning 40 to 80 percent area median income (AMI) and 23 units for the formerly homeless, as well as 28,000 square feet of ground-floor retail and community space including a daycare center. The project is part of the city’s Downtown Far Rockaway Revitalization Plan and is located between Mott Avenue to the north and Cornaga Avenue to the south.

In addition to the new building, city officials have also completed $114 million of infrastructure improvements including more than two miles of new storm sewers and new curbs, 88 new catch basins to alleviate flooding, 101,000 square feet of new sidewalks, the replacement of 10,000 feet of sanitary sewers and aging water mains with new pipes, and the planting of 71 new trees.

“These affordable units, when partnered with great community space and $114 million in streetscape improvements, represent a game-changing moment for this community,” said Dan Garodnick, New York City Department of City Planning director and City Planning Commission chair. “Congratulations to borough president Donovan Richards, The Community Builders, and all of our partner agencies that helped to make this possible.”

These upgrades were facilitated by New York City’s Department of Design and Construction, Department of Environmental Protection, and Department of Transportation. Original studies projected a seven-year construction schedule for the infrastructure upgrades and a project cost of $139 million. The agencies managed to complete the project in less than three years and $25 million under budget.

“These projects exemplify what it means for New York to become a ‘City of Yes,’” said mayor Eric Adams. “This is the kind of community-led and community-supported investment we want to see more of and a prime example of government working the right way for the people of this city: getting this done ahead of schedule and under budget.”

Amenities include a laundry room, a fitness room, and a rooftop terrace with a walking track.