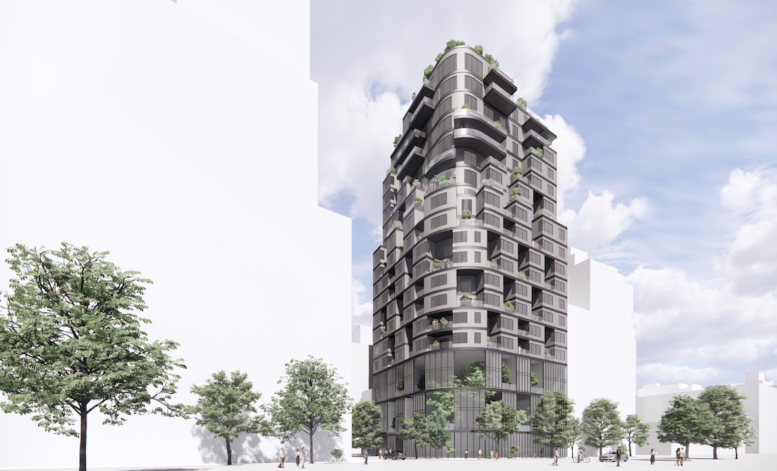 The first rendering has been released for 24-01 Queens Plaza North, a 19-story residential tower in Long Island City, Queens. Designed by ODA New York and developed by New Empire Corporation, the building will house more than 100 condominium units ranging from studios up to two-bedrooms, and max-out at 115,000 gross square feet. The amenity offerings will include a penthouse resident lounge, communal outdoor spaces, on-site parking, and a fitness center. The lower levels of the building will also house an unspecified commercial volume.

As illustrated in the rendering, the building exhibits the design studio’s signature style with dozens of recessed balconies and cantilevered floors. The first three floors are partially enclosed in double-height floor-to-ceiling glass with a series of voids that will likely be activated as resident amenity spaces. Above the third floor, the façade will mostly comprise dark gray cladding with oversized windows and varying balconies. Unlike other projects from the studio, the project features sweeping curved corners, giving the massing a unique modern appearance.

ODA and New Empire previously collaborated on 208 Delancey, a condominium development on the Lower East Side, which is set to open this spring.

“With many young professionals renting in Long Island City for quite some time, now could be the time for them to purchase their own home,” said Emily Zhu, chief marketing officer of New Empire. “With close proximity to Manhattan and a more affordable price point, Long Island City is transforming from an industrial hub to a diversified, young community.”

New Empire acquired the site at 24-01 Queens Plaza, currently an 8,967 square-foot lot with a low-rise commercial property, for $26 million. The acquisition marks the developer’s second project in Long Island City following The Neighborly at 37-14th Street, a seven-story, 77-unit condominium building with 8,000 square feet of amenities.

“Situated on the Northern side of the Queensboro Bridge, we were attracted to this location as it’s a dynamic gateway to Manhattan, and continues to be in demand,” said Bentley Zhao, chairman and CEO of New Empire. “From the success of our other LIC project, The Neighborly, we predict this too will draw interest from first-time buyers, many being young professionals who have settled into New York City from outside of the United States, specifically Asia.”

This latest project is expected to break ground in the fourth quarter of 2022.