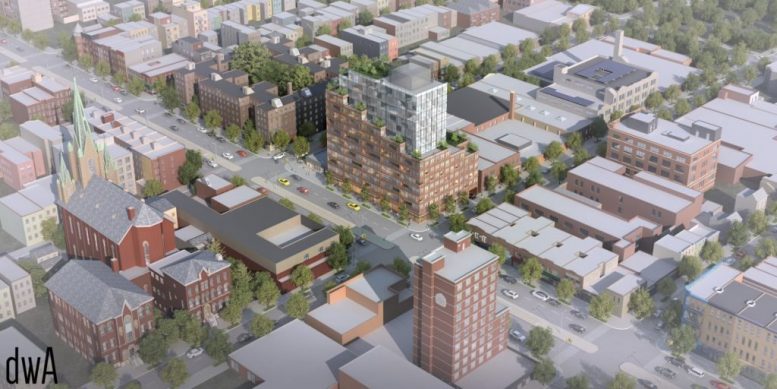 Of the total residential volume, 25 percent of the units will be permanently affordable at an average of 46 percent of the area median income (AMI), or between $40,960 and $51,200 for a family of three. In the last five years, this is one of the lowest AMI averages achieved in Brooklyn.

Linked to this approval is a first-of-its-kind Community Benefits Agreement, or CBA, a new approach to ensure mixed-income developments yield lasting benefits for the surrounding community. This includes the level of affordability, the creation of jobs, and infrastructure improvements.

“We have held conversations and discussions with the community over the past year and are confident that 737 Fourth Avenue will bring much-needed benefits to Sunset Park,” said Vivian Liao, co-founder, and principal at Totem. “With the help of the community, we have specifically designed 737 Fourth Avenue to bring housing, transit accessibility, green design, and jobs to the neighborhood, while also setting a precedent for future inclusionary zoning with the CBA.”

Last year, the proposed project and rezoning proposals sparked protests by local community groups who argued that the new developments in the neighborhood should only include 100-percent affordable housing projects. This goes against the City Council, Community Board 7, and Brooklyn Borough President Eric Adams, who all support the project as a positive contribution to the creation of affordable housing.

In an official statement, Borough President Adams said she agrees that 100-percent affordable housing developments are much needed, but that it is also not realistic to expect such outcomes on private land.

Totem, the Brooklyn-based developer responsible behind the applications, confirmed their intention to designate 24 percent of the building’s residential area as affordable housing from early project phases. The developer has also committed to improving transit accessibility to bike riders by providing publicly accessible bike parking. In partnership with council member Menchaca’s office, a portion of these bike spaces will be available to Sunset Park delivery workers, helping to support these essential workers. Brooklyn-based startup Oonee will install the bicycle docks.

“Fifth Avenue Committee has been a leading voice for housing advocacy across Sunset Park, which has been experiencing one of the worst housing shortages in New York City,” said the committee’s executive director Michelle de la Uz. “Sunset Park is in desperate need of more housing, and this project at 737 Fourth Ave will bring exactly that to the neighborhood, including critically needed deeply and permanently affordable housing. We’re thrilled to be working with Totem on such a groundbreaking and collaborative project that truly puts the needs of the community at the forefront, as described in the Community Benefits Agreement.”

At this phase of development, it is unclear when the project might break ground.

Be the first to comment on "City Council Unanimously Approves Contested Development at 737 Fourth Avenue in Sunset Park, Brooklyn"