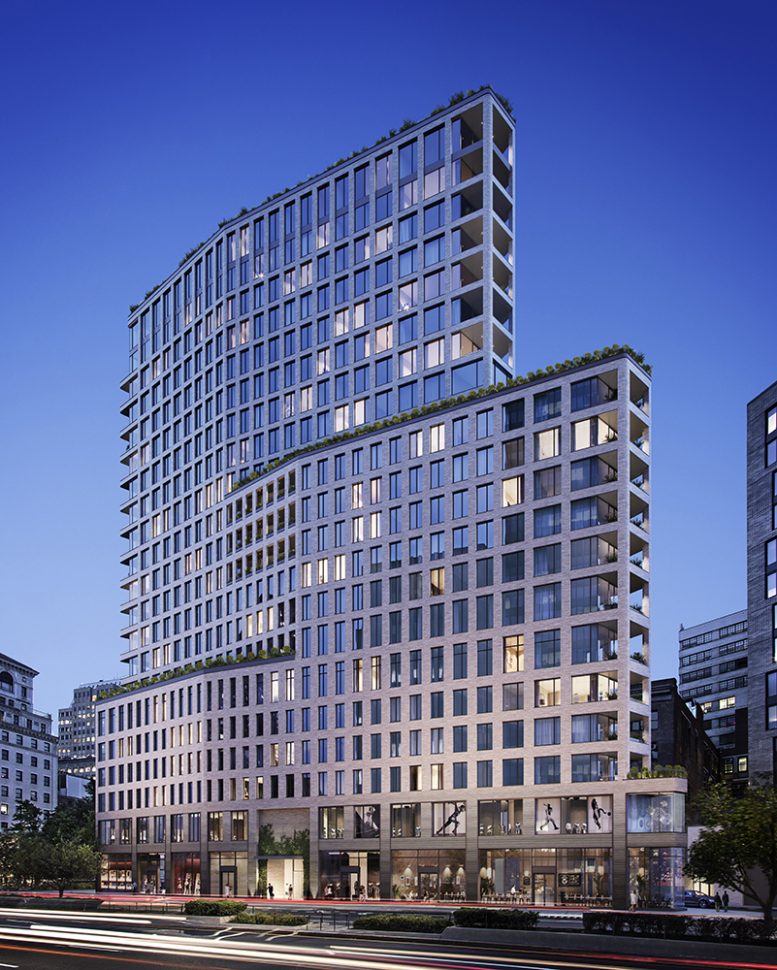 Excavation has begun for One Boerum Place in Downtown Brooklyn. The upcoming ground-up, mixed-use condominium tower will rise 21 stories on a narrow, triangular-shaped plot of land. The site is bound by Boerum Place, Red Hook Lane, and Fulton Street. SLCE Architects is the designer while Avery Hall Investments, Allegra Holdings, and Aria Development Group are the developers. The joint venture team was recently able to acquire a $165 million construction loan from Jutland Finance. The total cost of One Boerum Place is expected to be around $250 million. 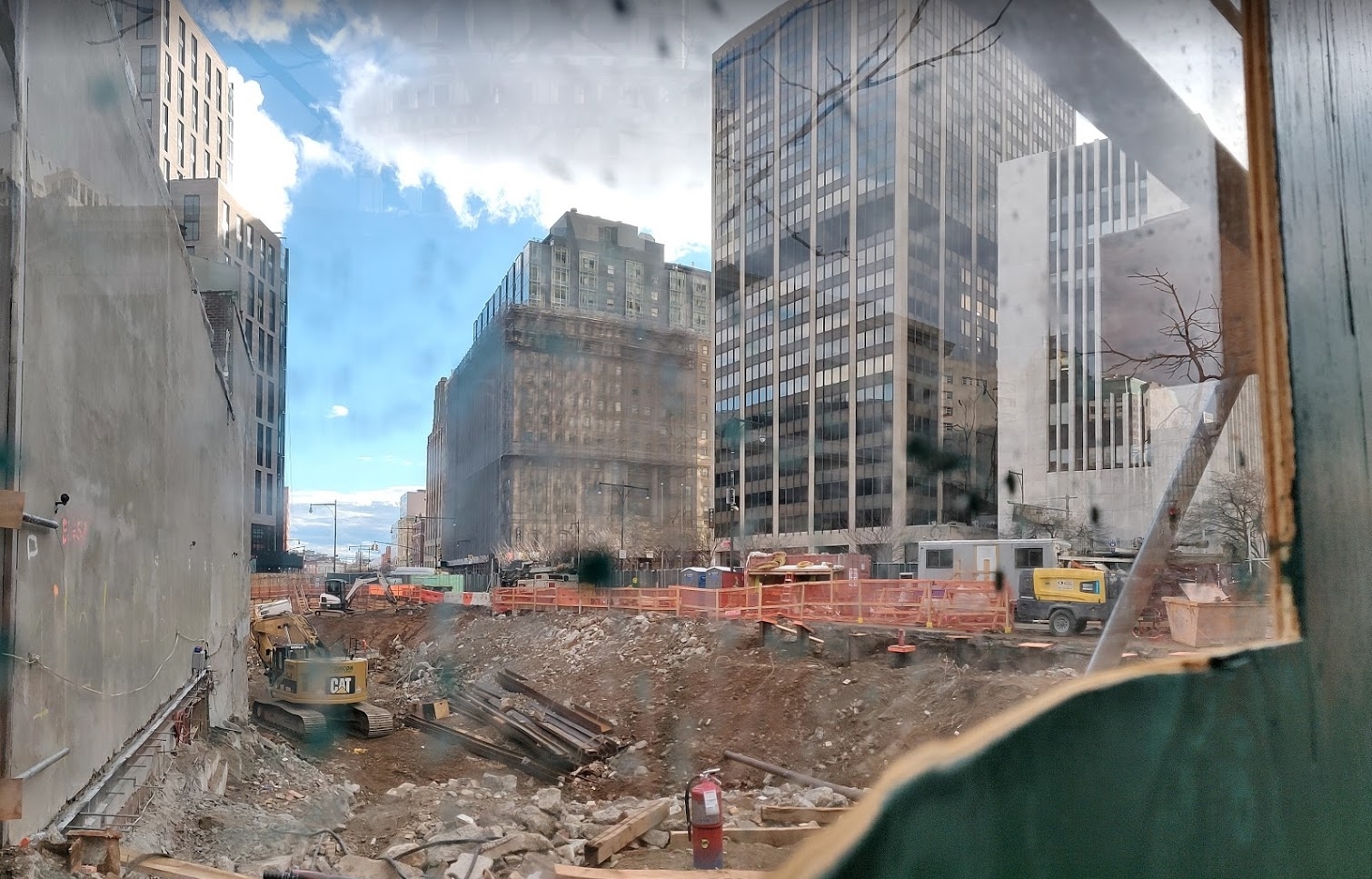 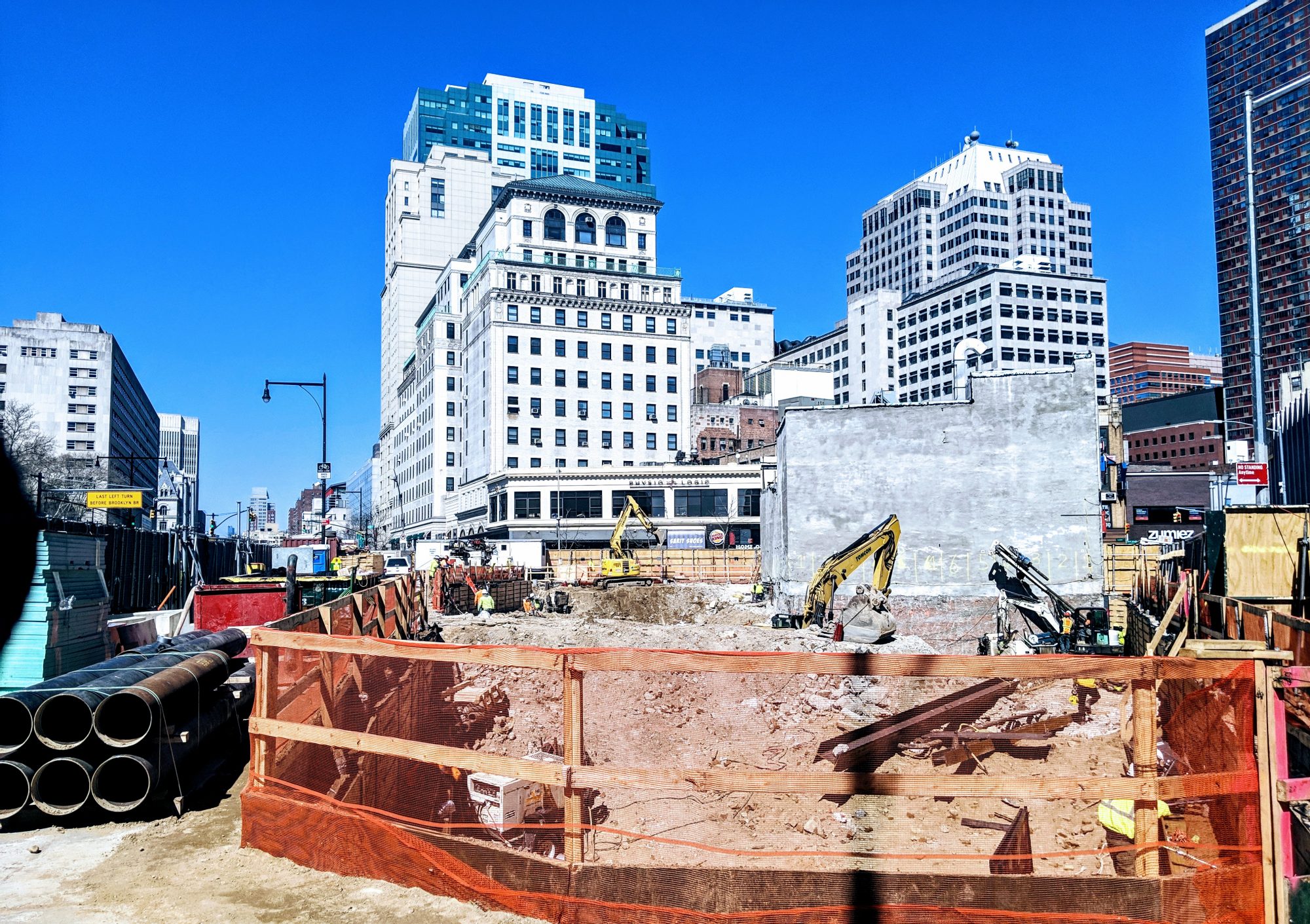 A couple years ago, 50,000 square feet of air rights was purchased for $16 million. The Brooklyn Law School sold the original four-story low-rise structure that stood at the site to the developers for just over $76 million. Demolition began in the second half of last year. 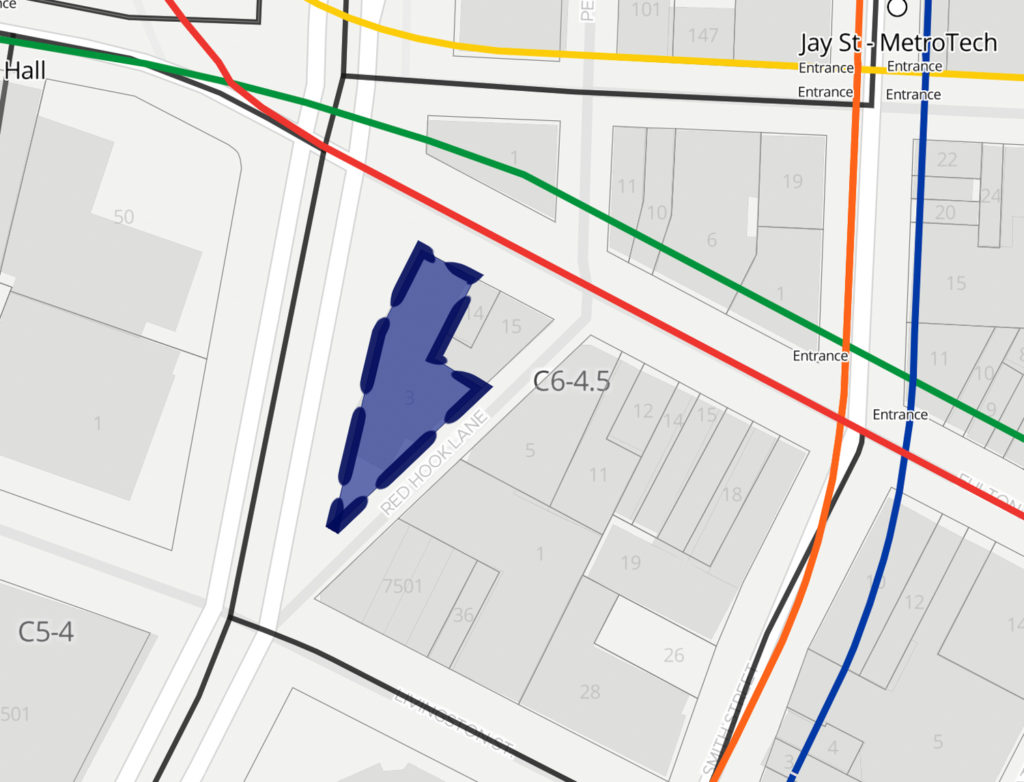 The lot of 1 Boerum Place highlighted in blue, image via ZoLa

The main rendering shows the massing and form of the future structure dictated by the angled streets and geometric shape of the site. The western façade will run parallel to Boerum Place and feature a setback each third of the way up. This would create a staggered and stepped edifice that will break up One Boerum Place’s wide profile. Expansive landscaped outdoor terraces will occupy each of these spaces, with the largest being the roof deck that will stretch the length of the flat roof parapet. The northern and southern ends of the residential floor plates will have units with outdoor terraces housed within the massing of the tower. They will be visually aligned with the rigid grid of floor-to-ceiling windows. One benefit of One Boerum Place’s location is how it will rise and be set away from the dense cluster of tall buildings in Downtown Brooklyn. This provides the opportunity for more daylight exposure and fewer casted shadows on the eastern and western elevations.

There will be about 183,000 square feet of residential space divided among 122 units, which will consist of a selection of one-, two-, and three-bedroom spaces. Amenities will include a two-story fitness center, a swimming pool, a sauna, an entertainment lounge, a children’s playroom, a 24/7 doorman and concierge service, a parking garage, a storage room, and an landscaped rooftop deck with an outdoor kitchen and seating.

Nearly 22,000 square feet of ground-floor retail space is set to occupy the base. This would go hand in hand with the large number of cafes, restaurants, and retail options that are spread across the neighborhood. Most of them are located on Fulton Street between Flatbush Avenue and Brooklyn Bridge Boulevard. Other large dining, entertainment, and retail facilities include City Point’s DeKalb Market Hall, Century 21, Target, Trader Joes, H&M, Macy’s, and Alamo Drafthouse Cinema. The closest subways include the A, C, F, and R at Jay Street—MetroTech; the 2, 3, 4, and 5 at Borough Hall and Hoyt Street; and the G at Hoyt—Schermerhorn.

One Boerum Place is expected to be completed sometime in the first quarter of 2021.

13 Comments on "Excavation Begins For One Boerum Place, in Downtown Brooklyn"