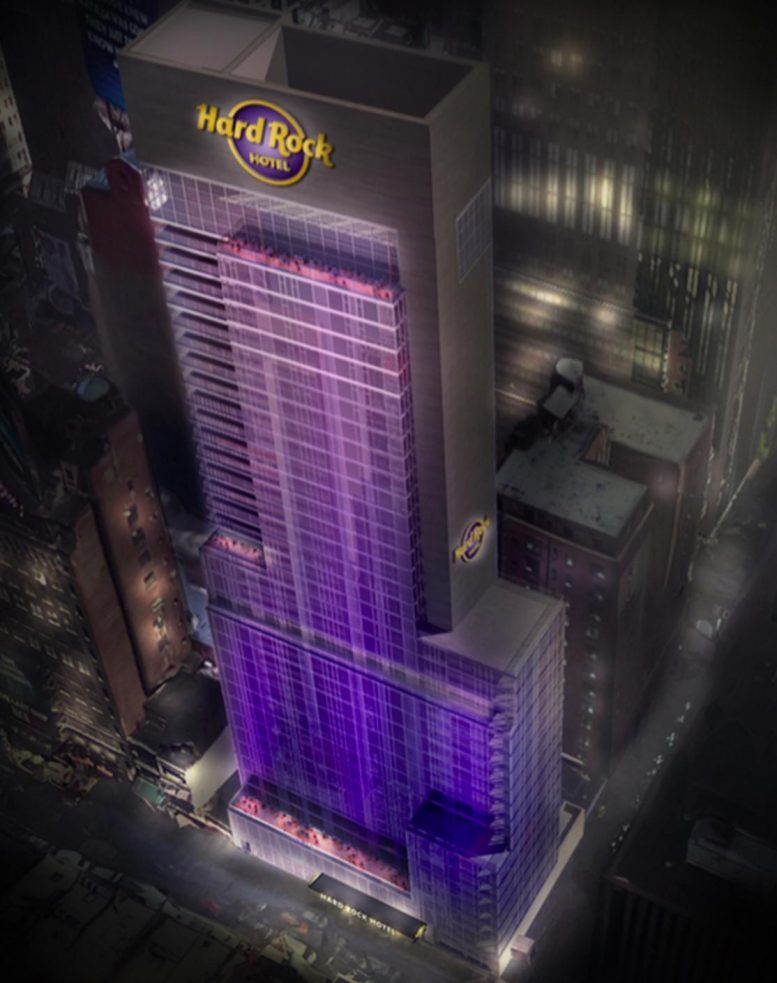 Work is now progressing quickly for Times Square’s impending Hard Rock Hotel, situated between Sixth and Seventh Avenue at 159 West 48th Street. The 445-key inn is being designed by Berg + Moss Architects. The 225,000 square foot project is being developed by Extell, in partnership with Hard Rock International. The site was purchased by Extell eight years ago for $26 million, along with the necessary air rights that will allow the structure to rise 442 feet tall. The previously existing parking garage has since been demolished, and now work on the foundation is underway.

The Hard Rock Hotel site from above. The construction site with the red construction crane in the foreground is 145 West 47th Street. Photo by Michael Young

Looking from above, the 13,000 square foot site has progressed significantly since YIMBY last checked in back in July. Excavation is nearly finished, with a small section on the eastern end of the property remaining. The foundation walls on the northern side are about halfway complete, with scaffolding and equipment arranged around the concrete walls in multiple sections. Work on the core and lower levels of the building have not yet begun, but should start by spring.

When complete, the new tower will stand directly next to McGraw Hill Park, with hotel views facing south towards Times Square and north towards the upper half of the Midtown skyline. Other features of the development include a rooftop lounge and bar, a restaurant, a lobby lounge, and an underground speakeasy. From the main rendering, the logo will be boldly displayed on the southern and eastern elevations.

This is only one of several new hotels set to open in Times Square. Some other examples include the Marriott Edition which launches next month at 20 Times Square, with one of the largest LED screens in the district and the country. 1568 Broadway, just across the street from the Edition, is about to undergo a massive demolition and construction project called TSX Hotel. A Margaritaville Hotel on West 40th Street is also underway, at the southern end of Times Square.