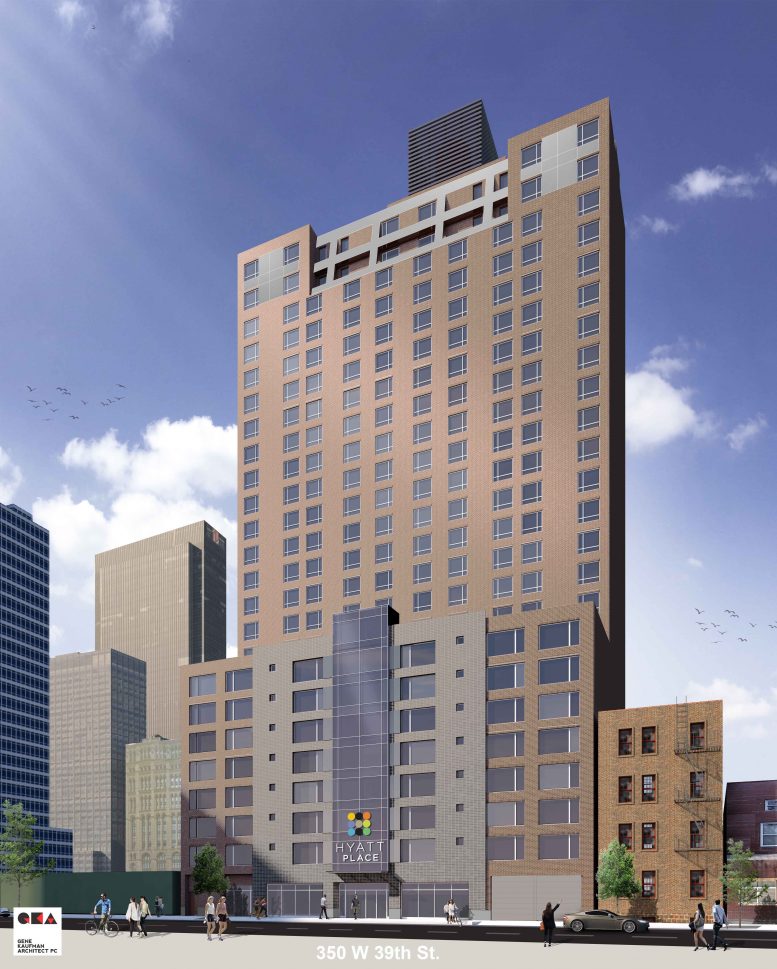 Hotel developer Sam Chang has just broken ground on his second hotel on West 39th Street between Eighth and Ninth avenues. YIMBY has the first look at the building at 350 West 39th Street, which will be designed by Gene Kaufman.

The hotel, a Hyatt Place, will reach 25 stories into the air and hold 518 rooms, according to PR reps for the project. That’s larger than the plans on file with the Department of Buildings. The agency approved permits last month for a 20-story, 422-key hotel with 122,178 square feet of commercial space. Apparently Chang is assembling more air rights for the development, which will give the building enough square footage to boost it five stories taller. Once the air rights transfer goes through, Kaufman will likely file updated plans.

The development will offer three spaces for drinking and eating: an indoor restaurant, a backyard eatery, and a bar/lounge on the first floor. The cellar level will have a fitness center, business center, and meeting space.

The Hyatt Place will be Kaufman’s tenth hotel in the Garment District and his sixth collaboration with Chang in the neighborhood.

The design is deeply unexciting, even for Gene Kaufman, who was once declared “the baron of bland buildings” by Crain’s. It looks like the kind of building you’d find by an airport anywhere in America, rather than in the middle of a dense New York City neighborhood. We can’t decide if it’s better or worse than the 25-story, lattice-clad hotel underway next door, which is also being developed by Sam Chang.

Chang’s McSam Hotel Group scooped up the block-through site for a whopping $112 million in 2014. The large property has been divided into three different lots, two of which will become McSam Hotels. The third hotel will rise on the southern half of site along West 38th Street. Quadrum Global is developing the 26-story, 500-key hotel, and they thankfully hired Marvel Architects to design it.