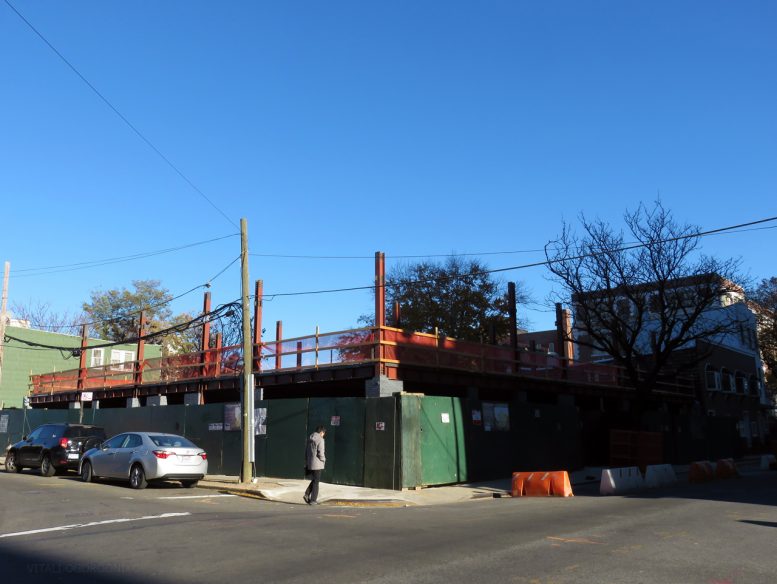 Earlier this month we released a brief update on Times Development’s 44-unit residential building at 27-05 41st Avenue in Long Island City. Today, we take a closer look at the six-story project that straddles the line between the high-rise Queens Plaza district to the south and the low-rise Dutch Kills neighborhood to the north. Structural steel has risen to the second level, while gray brick cladding already wraps around ground level columns. The project is designed by architect Michael Kang, who is also behind the nearby hotel at 40-47 22nd Street. Yan Po Zhu of Flushing-based River Bridge Tower LLC is listed as the owner. 6,970 square feet of ground level retail will contribute to the budding shopping corridor along the avenue. The structure takes up 80 percent of the roughly square, 10,000-square-foot corner lot that measures 100 feet along both 41st Avenue and 27th Street. Permits state that the 50,530-square-foot building would allocate 30,041 square feet to residences. The property sits just north of the Long Island City Special Zoning District, which waives parking minimums for residential properties. So, 22 indoor parking spaces are included. The façade consists of dark brown brick that frames large windows and balconies. The building’s most successful design aspect is its massing. The six-story, roughly 70-foot-tall building (if including the bulkhead) makes for a smooth transition between the blocks to the south, where recently-built apartment buildings rise between up to sixteen stories, and the block to the north, which consists mostly of two- to four-story structures. 27-05 41st Avenue shows further deference to neighborhood scale by introducing a three-story setback at its northern end. The buildings fulfills a similar urban role as the six-story 23-01 41st Avenue under construction three blocks to the northwest. Looking northwest along 41st Avenue. The Queens Boro Tower is under construction on the left.

The structure follows the street wall and contributes to the emerging mid-rise corridor along 41st Avenue, in tandem with the Queens Boro Tower under construction catty-corner at 41-04 27th Street. The two buildings also cap the northern end of the high-rise canyon forming along 27th Street, which gradually grows taller as the street progresses south, towards the Court Square district.

The corner property was previously occupied by three two-story townhouses, a single-story commercial property at the north end on 27th Street, a fenced-off surface lot on 41st Avenue, and an adjacent, two-story, shingle-faced rowhome. All were torn down between 2007 and 2013. After a subsequent lull in activity, excavation resumed at the start of 2015, with concrete foundations and cellar walls largely finished by September of this year. The neighborhood has a decidedly low-key, residential ambiance, yet 27-05 41st Avenue sits just steps away from one of the borough’s most-heavily-trafficked hubs, at the foot of the Queensboro Bridge. The project marks the northern fringe of the booming development district, where over 50 active projects are transforming the former manufacturing district into a dense urban core. The Queens Plaza and Queensboro Plaza stations, served by the E, M, N, R, W, and 7 trains, are accessible via a five-minute walk to the south and southwest respectively, putting Manhattan within single-stop access. The 21 St-Queensbridge station on the F train sits slightly further to the northwest.