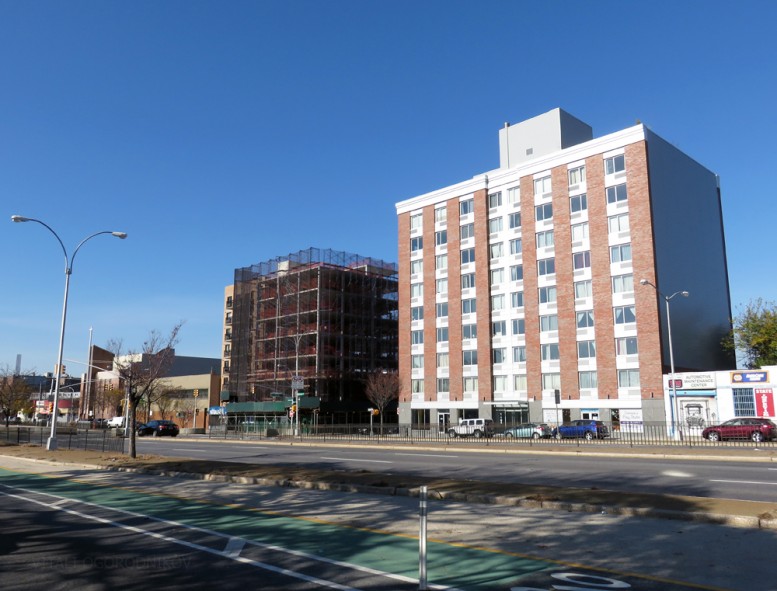 While developments from Downtown Brooklyn to Hudson Yards are transforming skylines and making headlines, smaller scale projects are also capable of altering neighborhood paradigms. Along Queens Boulevard, in the borderlands of Woodside and Sunnyside, this is now the case, and new buildings are changing a former no-mans-land into an increasingly popular neighborhood. Neighborhood Map (based on Google Maps)

Long Island City’s dramatic development boom seems to be spreading shockwaves deep into the borough of Queens. A mile and a half east of LIC, between 51st and 58th Street, Queens Boulevard runs alongside the sprawling Calvary Cemetery to the south. The stretch is surrounded by densely built up blocks to the north, east, and west, which offer family-friendly, pre-war charm mixed with a diverse selection of mom-and-pop retail, dining, and local cultural institutions.

However, the blocks on the north side of the Boulevard facing the cemetery were lined with abandoned properties, parking lots, mechanic shops, and not much else as recently as eight years ago. Two churches and an Islamic center provided a cultural element to a non-existent neighborhood.

The following years ushered understated yet dramatic change. By 2014, an eight-story apartment building with ground level retail had risen at 51-23 Queens Boulevard, a six-story Quality Inn appeared two blocks to the east, and the Icon 52 apartment building was finishing construction at the intersection of Queens Boulevard and 52nd Street. Across 52nd street, the two-story Post 2813 for Veterans of Foreign Wars, an attractive yet unremarkable beige brick structure with sparse ornaments, still occupied the future site of 51-25 Queens Boulevard. Earlier this year, a seven-story residential building topped-out at the site. Neda Development is behind the 29-unit project, which clocks in at 27,000 square feet with 2,759 square feet of retail and 4,272 square feet of community space on the lower floors. Project board at 51-25 Queens Boulevard

The Traditionalist design is generally appealing. The two story base is clad in a limestone-looking finish and will feature large windows, ground level awnings, and a cornice trim above the second floor. The four floors above will be clad in red brick, accented with large central windows set into a white façade. The accent band runs to the top floor, capped by another cornice. Unfortunately, air conditioning units below the windows cheapen the overall look. At the moment, the structure is a concrete skeleton and we expect cladding to go up within the coming months, the quality of which will determine whether the design is ultimately worthy of praise. In either case, the building is an improvement over its neighbors. Tall ceilings make its seven stories rise as high as the eight floors of either surrounding structure.

The building to the west is acceptable as infill and is commendable for being the first of its kind along this stretch, but its unadorned yellow brick walls, exposed concrete floorplates, and protruding air conditioners leave much to be desired.

To the east, Icon 52’s nine stories and 66 units make it the largest and tallest of the group. From up close, the brick, stone, and metal textures are rather pleasant, but from further away they comes off as more mundane, or even ungainly. While the aesthetics might be debatable, the building itself is still a clear positive for the block. According to Modern Spaces, the building was fully leased in just six weeks, despite average rents clocking in 50% higher than those in the surrounding neighborhood.

While the attractive interiors, rooftop deck, and sweeping Manhattan vistas surely helped, this success is a testament to the viability of this new microhood. It is easier to create vibrant blocks when they are already surrounded by successful neighborhoods, as is the case here, versus starting something in the middle of nothing. Each of the new buildings contains ground level retail, and 51-25 will feature tree plantings along the perimeter. These new neighbors already make the churches and the mosque feel less out of place. The six-story Quality Inn, despite the humdrum quality of its exterior, further diversifies local users. More development appears to be on the horizon. Across the street from the hotel, at 43-31 54th Street, a 6,000 square-foot lot has already been cleared and fenced off. If it were combined with the unused lot to the south on Queens Boulevard, the site would be capable of supporting the area’s largest project yet. There are plenty of other sites with ample potential for development on the surrounding blocks. To maximize the neighborhood’s immense potential, the city needs to make physical and legislative changes. It is baffling that the floor to area ratio (FAR) at the 51-25 site is capped only at 5. Transportation infrastructure is ample. The 52nd Street subway station is only a block away, where the 7 Train takes just 15 minutes to get to Manhattan.

The site’s location directly on Queens Boulevard, a major thoroughfare, will ensure that car commuters are unlikely to add much congestion to local streets. The newly introduced bike lanes add yet another option, and these could benefit from a new Citibike station in the immediate vicinity. Zoning codes and common sense dictate that wider streets can support denser and taller development, and Queens Boulevard’s ten lanes make it among the widest in the borough. And though the green space on the other side is a cemetery and not a park, tall structures lining the perimeter of centrally located open spaces is a classic New York typology.

The city is in the midst of an acute housing crisis, and it makes sense to upzone the areas that can handle an influx of newcomers. If community amenities are provided within new developments, the existing neighborhoods nearby will benefit, as well. Underused median on the south side of Queens Boulevard, with the cemetery to the left and the neighborhood to the right

The wide boulevard-cemetery couplet provides a unique opportunity for pedestrian space creation. In general, wide streets with green medians tend to address both sides of the street equally. However, between 51st and 58th Streets, the south side of Queens Boulevard faces the solid cemetery wall while the north side sits next to the emergent neighborhood. While the boulevard’s symmetrical arrangement makes sense east and west of this stretch, any median space on the south side of the boulevard is borderline useless. The lanes along these blocks should be shifted south to concentrate public space on the north side of the boulevard. The resulting green space would be 35 feet wide and over 2,000 feet long, stretching from Joe Sabba Park to 58th Street. Even accounting for existing street intersections, the new arrangement would create around 60,000 square feet of public parkland without sacrificing any traffic lanes or parking spaces.

Current Queens Boulevard layout (image by Google Maps). Note: recent pavement modifications and bike lanes have not been introduced at the time the imagery was taken

The enclave at Woodside-Sunnyside may not be the most exciting or notable space in the Big Apple, but this brand new piece of New York’s diverse mosaic of neighborhoods is growing quickly, and its future looks bright. And while implementing a few simple and cost-effective modifications could greatly improve the Queens Boulevard corridor, even without the green space, we are likely to see additional development surprises over the next few years.