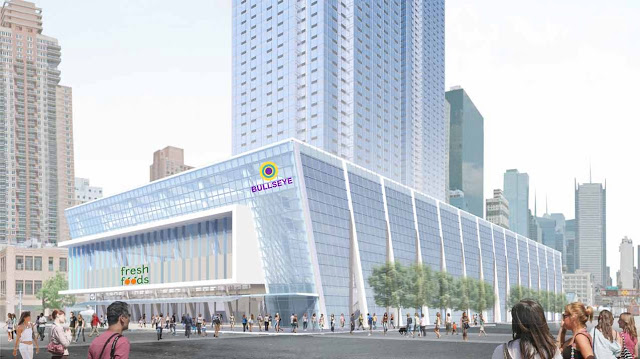 Nothing formal has been announced, but it looks as though Silverstein’s plans for 514 Eleventh Avenue are now proceeding. The lot–currently occupied by a Mercedes dealership–is situated between the 42nd Street corridor and the Hudson Yards, making it a prime candidate for a large mixed-use development. .

Blueprints for the building’s first three retail floors show a development similar to Silverstein’s neighboring Silver Towers, but with a lot more retail. Floor plans show how the enormous ground levels are punctuated by two elevator cores, so it isn’t hard to come to the conclusion that this will be yet another twin-towered development.

The area surrounding 514 Eleventh Avenue is still dominated by entrance ramps for the Lincoln Tunnel. Each successive project goes a long ways towards transforming the overall neighborhood, and 514 Eleventh is just one of many proposals that should be imminently underway. Extell has an adjacent site at 502 West 41st Street, and the zombified Atelier II is also right around the corner. Piece by piece, a new community is finally coming together.

RKF’s site has the full rundown on the leasing availability at 514 Eleventh Avenue, and the early renderings make the retail space look quite large. The store design isn’t bad, although projects in this neighborhood tend to get value-engineered. If the glimpse below is anything to go by, a grocery store like Whole Foods could be an anchor tenant, in addition to a big box store.