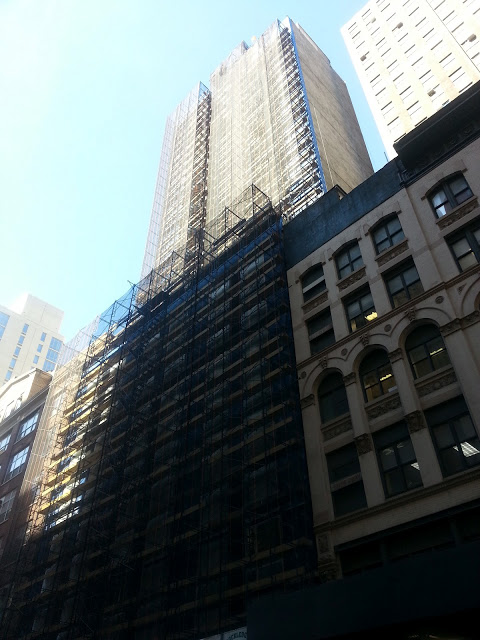 No neighborhood in New York is safe from the work of Gene Kaufman, and the Garment District has been particularly susceptible to his monstrosities. Peter Poon is another nefarious figure, disfiguring the skyline one protrusion at a time. Now, two hotels are rising across from each other on 37th Street, one designed by each architect.

The first hotel appears to have topped-out already. The facade is still in progress, hidden by a web of netting, but the end result will undoubtedly be hideous. Designed by Peter Poon, the building will be occupied by a Courtyard, a Marriott Hotel. The hotel is only twenty stories tall, which is luckily short enough to leave the skyline relatively unscathed.

The Garment District is almost entirely made up of beautiful pre-war structures. Development is a good thing, but new projects should be held to design standards. Instead of complementing the nearby buildings, Kaufman and Poon’s towers are usually obtrusive tumors that add nothing to the skyline or the street-scape.

Luckily the Poon-designed Courtyard respects the street-wall that defines New York’s extremely dense urbanity, falling in line with the two neighboring structures. Given that the project–on a pedestrian level–is actually just fine, perhaps New Yorkers can hold out hope that the building’s facade won’t look like it’s straight out of the Soviet Union.

Strangely enough, Kaufman’s hotel on the street–a future 21-story Homewood Suites by Hilton–actually isn’t that bad. Calling it acceptable would even be plausible, besides the enormous brown wart that will eventually reside on the building’s roof. The rendering isn’t too detailed, but the facade actually looks like it makes an attempt at respecting the building’s pre-wars neighbors, while also conforming to the block’s existing street-wall.

In the below rendering (Kaufman’s design is the lighter building in the middle), it’s actually difficult to pick out which building is new. That’s definitely a good thing. It would be nice if more of Kaufman’s designs were like his project on 37th Street, but holding out hope for such a 360 degree change would definitely be naive…