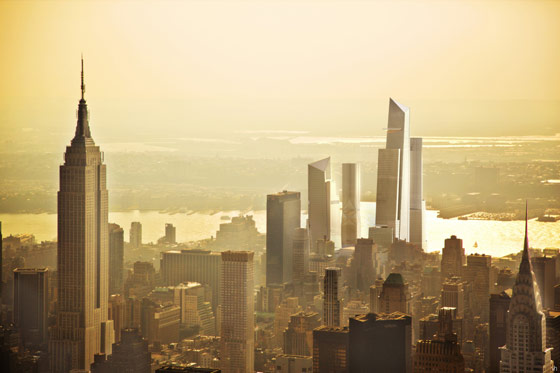 An excellent article published in New York Magazine (From 0 to 12 Million Square Feet, by Justin Davidson) has a set of new renderings of the Hudson Yards project. It looks as though the site plan has indeed changed, as the latest renderings differ dramatically from previously released images. Perhaps the rendering shown on Bloomberg wasn’t dated after all?

For starters, the project’s two ‘anchoring’ office towers are now much different in height. The North and South Towers were slated to be 1,292 and 1,017 feet tall, respectively. The new renderings show an extremely tall North Tower–apparently over 1,300 feet–while the South Tower, to be anchored by Coach, appears to have shrunk in height.

One fantastic addition to the site is what appears to be an observation deck protruding from the 1,300′ North Tower. Although the deck doesn’t add to the skyscraper’s aesthetic value, it will definitely be an amazing place to visit if it is built as rendered. If open to the public, it would likely become an instant landmark, especially as it’s located so close to the High Line’s final section, which is just beginning construction.

The South Tower–or ‘Coach Tower’–appears to have been shortened to roughly 850 feet in height. That’s certainly not diminutive, but it doesn’t come close to its northern neighbor. The mixed-use tower designed by David Childs still appears to rise to roughly 1,000 feet, although that tower’s design seems to have been tweaked as well.

What hadn’t been pictured before was the development’s first residential tower, which has now been revealed. Designed by Diller Scofidio + Renfro, the tower is an elegant & twisting mass of metal. When viewed from above, it almost looks like the outline of a four-leaf clover. The tower will contain a mix of 680 condominiums and apartments, and rise approximately 800 feet.

The key lesson to take away from the new images is that nothing is final until construction is underway, as the constant changes to the towers of the Hudson Yards project certainly confirm. What will rise on the Hudson Yards may not yet be set in stone, but it will be soon: construction is finally imminent, with work on the North and South towers expected to begin by the end of 2012.