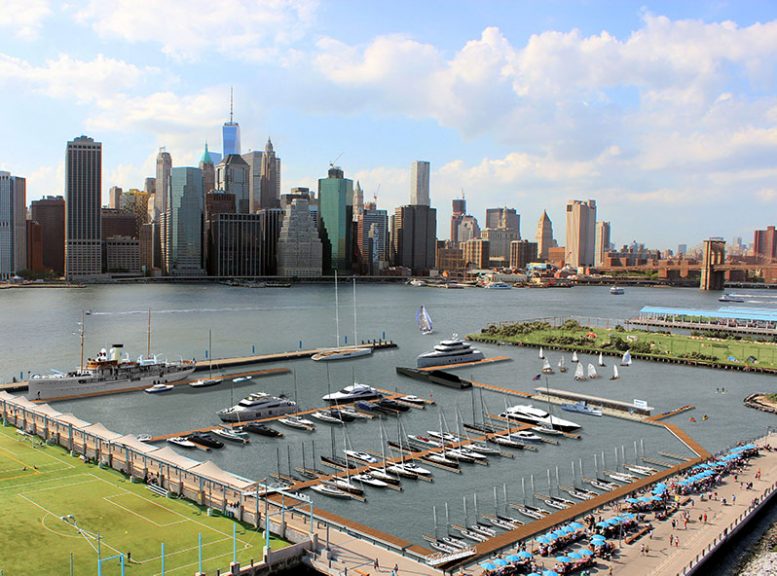 While New York City is composed of islands and intersected with rivers and marine throughways within every borough, city dwellers rarely embrace any aquatic entertainment within their own backyards. ONE°15, a new marina within the Brooklyn Bridge Park public waterfront, opened this month on the banks of Brooklyn Heights and aims to remind New Yorkers of an overlooked benefit of living within a coastal city. The marina is the first of its kind to open in New York City in more than 50 years.

Located on the banks of the East River in Brooklyn, ONE°15 Brooklyn is the culmination of a $28 million redevelopment plan from Singapore-based conglomerate SUTL Enterprise designed to welcome boaters, kayakers, and recreational sailors to the New York Harbor.

“ONE°15 is proud to bring to fruition the first new marina in New York Harbor in a generation and to welcome boaters to the calmest waters in the New York Harbor,” said SUTL Enterprise chairman and CEO Arthur Tay. “We were pleased to partner with Brooklyn Bridge Park and the City of New York to develop this outstanding marina, which will revitalize recreational boating in New York City and offer a wealth of community programs.”

During the design phase of the aquatic project, the team had to work around the sub-grade R train tunnels, which extend beneath the new public esplanade and waterway. To complete the project, close collaboration was required among all design, development, and construction disciplines.

“The operational team at ONE°15 Brooklyn Marina worked closely with engineers, architects, and its Singapore-based owners to maximize the usage of this iconic location, facing Lower Manhattan’s Financial District and flanked by Brooklyn Bridge and Governors Island, to accommodate the widest range of water enthusiasts,” said John Winson, general manager of ONE°15 Brooklyn Marina. “The marina will accommodate everyone, from deep-draft, oceangoing yachts to single kayakers.”

7 Comments on "ONE°15, the City’s First Public Marina in More Than 50 Years, Opens in Brooklyn Heights"