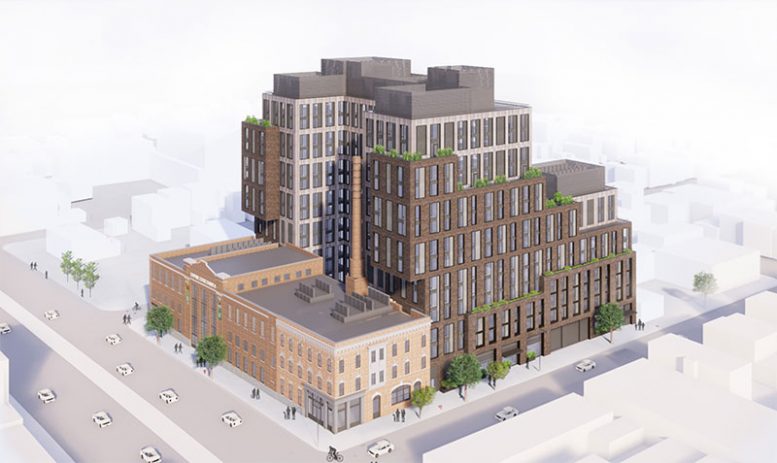 Design proposals from Dattner Architects are dated April 16, 2019 and illustrate the architect’s vision to adaptively reuse the existing structure in greater detail than previously revealed. If approved, the residential component would comprise 335 new apartments. The official breakdown includes 70 studios, 160 one-bedroom units, 88 two-bedrooms, and 17 three-bedrooms. While a portion of the apartments will be marketed as affordable homes, the plans do not clearly quantify the percentage versus market-rate properties. Additional components are located within the historic Dairy Building, including a 5,000-square-foot community facility and 29,000 square feet of commercial retail.

The Empire State Dairy Building at 2840 Atlantic Avenue dates back to 1915 and was originally completed by architects Theobald Engelhardt and Otto Strack. It housed the Empire State Dairy Company until the mid-20th century and remains today as an architecturally significant industrial building.

At the structure’s ground level, the architects have proposed entirely new glazing systems and an ADA-accessible entryway. Above the ground floor, existing windows, lintels, cornices, historic signage, and terracotta mosaics would all be contextually restored. An ongoing analysis will determine the structural integrity of the building’s iconic chimney and whether it should be removed, rehabilitated, or allowed to remain in place.

Portions of the property not protected by landmark status at 266 Barbey Street and 181-185 Schenck Avenue will be partially demolished and re-excavated to facilitate construction of the new retail component.

An announcement from the city in 2018 applauded the sale as a defining milestone for borough representatives, whose efforts are devoted to reshaping East New York.

“This was the largest, most significant sale in East New York since the rezoning of Atlantic Avenue, which has addressed the affordable housing shortage and is helping to reshape this area of Brooklyn,” said CBRE senior vice president Elli Klapper, one of the leading team members from the firm’s Tri-State Investment Properties group. “The project will help reshape Atlantic Avenue in accordance with the city’s overall vision for the neighborhood.”