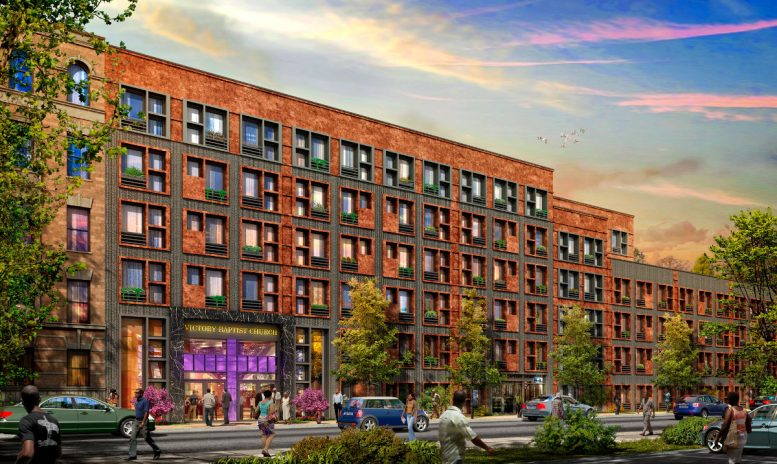 Today’s reveal comprises an oddly-shaped site that starts with an existing church at 1007 Union Avenue, and extends to several low-rise residential buildings on the same block, which will ultimately be demolished to make way for a very substantially-sized mixed-use project, containing both housing and community facility space. The development will be divided between two buildings.

The community facility space will be used by the existing Victory Baptist Church, and located on the ground floor of the larger building, comprising 7,903 square feet. There will also be 84,106 square feet of residential space between the two new structures, with 95 units located within. At an average size of 880 square feet, rentals appear to be likely, and Aufgang Architects is behind the design. While the renderings show PTACs are present, the facade largely makes up for their existence, with windows for the project segmented into smaller portions that mostly mask the aberrations. The images also show some greenery over the units, which further hides the air conditioning vents, but whether that part is realized remains to be seen, as phantom greenery that is never realized is an all-too-common occurrence in visualizations.

Michael Callaghan of Exact Capital is listed as the site’s developer at the Department of Buildings, and permits were pulled for the site in April. Demolition must still occur for the various extant structures, and no completion date has been announced yet.

Permits Filed for 1010 Washington Avenue in Morrisania, The Bronx

Permits Filed for 453 East 166th Street in Morrisania, The Bronx