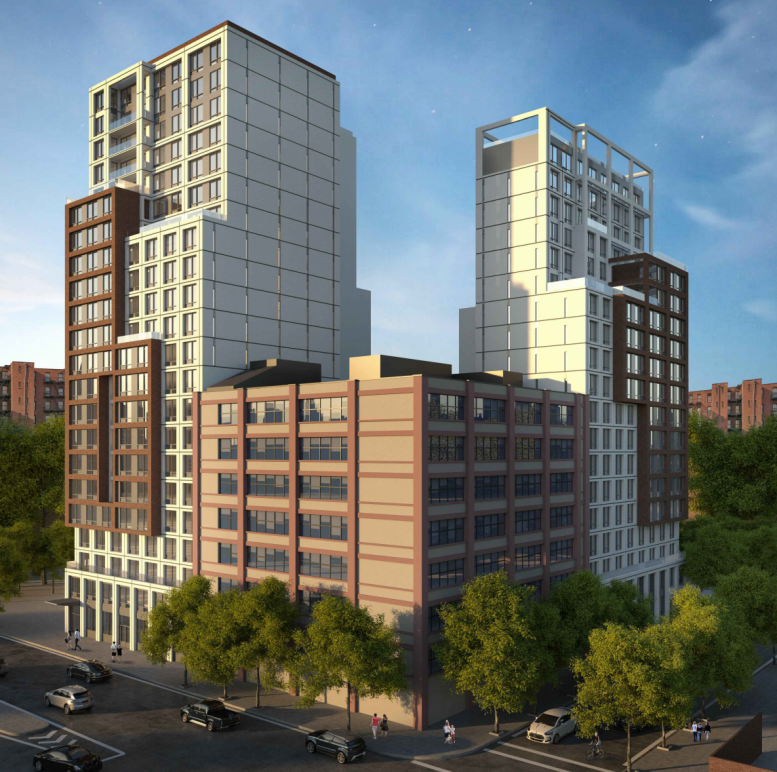 Downtown Brooklyn’s development boom only seems to be accelerating, with every recent completion seemingly matched by another tower breaking ground. Now, YIMBY has the first word as well as the reveal for a major project planned at 202-208 Tillary Street. The applicants have applied for a rezoning of the site for inclusion within the official Special Downtown Brooklyn District, and the resulting plans are set to allow two connected towers of 23 and 21 floors.

The gross floor area of the residential component would measure 234,316 square feet, with 183 units included between the two towers, 79 of which would be designated as affordable. Another 13,723 square feet would be set aside for ground-floor retail, and there would be 44 parking spaces built for the project as well.

Aufgang Architects is behind the design, which may still see some changes. The proposed version of the development is supposed to be “lower impact” on air quality than a taller possibility, which would replace the 23 and 21-story towers with twin buildings rising 42 floors apiece. However, the renderings and submitted zoning materials seem to indicate that the developers are heavily favoring the shorter plan.

Aesthetically, the development promises to improve yet another forlorn block of Downtown Brooklyn. The towers will consume an old storage facility, which is currently whitewashed and nondescript. The designs presented in the renderings aren’t exactly starchitecture material, but for a superblock on the edge of Downtown Brooklyn, the buildings could be worse.

Most importantly, the contribution of ground-floor retail will put additional eyes on the street, while the density up above shows that Downtown Brooklyn is now physically expanding beyond the bounds of the “Special Downtown Brooklyn District”.

YYY Brooklyn LLC is listed as the site’s developer, and completion is expected in 2020.