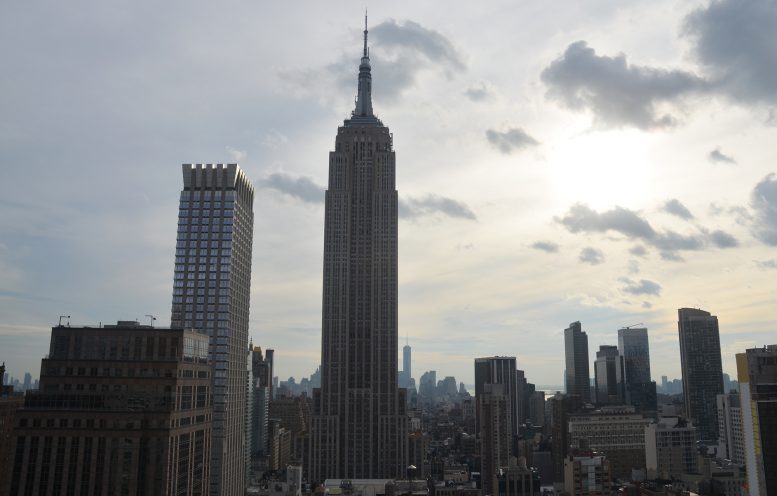 The Empire State Building as seen from the top of The Bryant. All photos by Evan Bindelglass unless noted

It was just weeks ago that The Bryant, a new building along the southern edge of Bryant Park, celebrated its topping out. YIMBY recently went all the way up to the penthouse terraces to check out the view. The Bryant as viewed from Fifth Avenue, left, and right, from its sales gallery at the top of 489 Fifth Avenue

The Bryant, located at 16 West 40th Street, is a hybrid: the base contains 230 hotel rooms and, starting on the 16th floor, there will be 57 condominium units. Joining their lobbies on the ground floor will be a restaurant. HFZ Capital Group is the developer. Rendering of The Bryant

The building, clad in terrazzo, rises 33 stories to 402 feet and is British architect Sir David Chipperfield’s first residential project in New York City. There are Juliet balconies on the north-facing rooms and some of the south-facing ones. The sixth-floor lounge, accessible to both hotel guests and residents, comes from NoMad-based Stonehill & Taylor Architects. Bryant Park, with The Bryant rendered to the right of the New York Public Library The view is impressive, to say the least. One can see the Empire State Building, from the top nearly to the bottom. Other highlights include views of One World Trade Center, Hudson Yards, the corner of Macy’s, the Statue of Liberty, the Bank of America Tower, and, of course, Bryant Park and the New York Public Library. The Bryant as seen from West 40th Street

The hotel is expected to open in March 2017 and the first condominium residents should be allowed to move in in June 2017.

3 Comments on "Scoping Out The Views From The Bryant, 33-Story Hotel And Condominium Tower At 16 West 40th Street, Midtown"