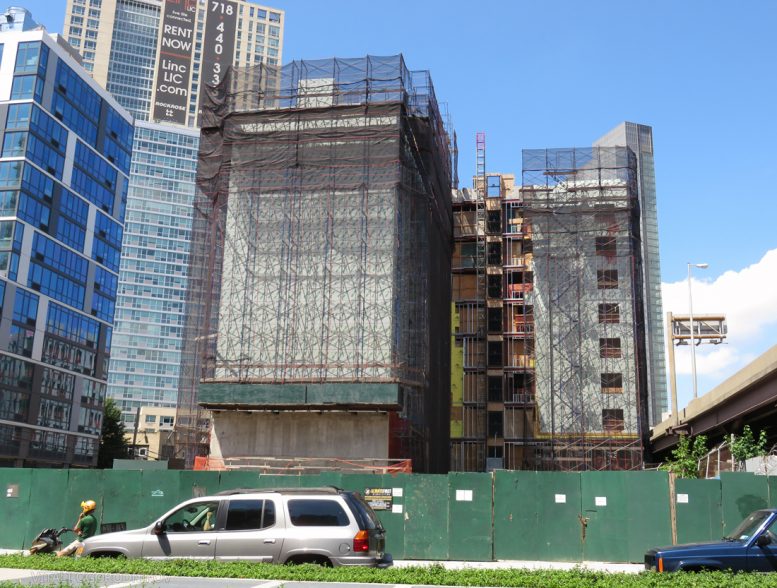 The last time YIMBY checked out the progress at Long Island City’s Hyatt Place hotel at the end of April, the building was approaching its final floor. Since then, the structure has both topped-out and been enclosed within its curtain wall. The future 108-room hotel, developed by Prakash Patel and designed by Michael Kang Architect, looks ready to receive its exterior cladding. Looking from the intersection of 43rd Avenue and Hunter Street

In the past 10 years, Long Island City has become a hotbed for hotel development. Most of the new hospitality establishments stand north of Queens Plaza at the Queensboro Bridge approach. In the meanwhile, the area to the south is seeing a surge of residential development. Most of the half-dozen hotels located south of the bridge stand several blocks west of the new high-rise core of the Court Square district, which is mostly enclosed within the wide curve of the elevated 7 train, which passes through the neighborhood en route from Sunnyside to Hunters Point and Manhattan. The new Hyatt would be the closest-located hotel to the Court Square office district, as well as to the Queens County Courthouse, making it advantageous for business travelers in particular. Its nearest competition, the 176-room Aloft Hotel, is nearing completion at the other end of the city block, on the opposite side of the elevated Queensboro Bridge approach viaduct that runs past the Hyatt. The Court Square district along the Queensboro Bridge viaduct. Hyatt Place is on the center right background, wrapped in black scaffolds. Looking southwest from the park by Hunter Street, across the Queensboro Bridge viaduct.

Like most new building rising along the flanks of the half-mile-long viaduct, the hotel greets the adjacent elevated roadway with a blank wall at the east facade. Though the third-story windows of the hotel’s east wing face the viaduct to the east, they also open directly upon a small but cozy green plaza to the north, built in 2010 upon a triangular wedge between Hunter and 27th streets. The construction pace of the nine-story Dutch LIC residence on the other side of the park is in step with that of the Hyatt. The northern portion of the Hunter Street park

In conjunction with the eight-story apartment building rising at 42-83 Hunter Street across the viaduct from the Hyatt, the three buildings frame the still-nameless pocket park as a proper urban boundary. Public squares work best when they are defined by buildings at the perimeter. Such enclosure not only provides visual definition, but also concentrates public activity. For a simple visual of the principle at work, picture an Italian palazzo set within the dense stone walls of a medieval town. Now, take the same palazzo and place in the midst of a field. Clearly, the otherwise-active public space would lose all of its relevance if taken outside its dense urban context.

At the moment, the small Hunter Street plaza sees its share of pedestrian flow, but it generally serves as a transitional space. We anticipate that it would transform into a true community courtyard once the adjacent buildings shed their construction scaffolds and open their doors to new residents and visitors. In particular, we see the 974-unit Hayden, across the street from the Hyatt to the west, as a neighborhood game-changer. The 1990 completion of the Citibank Building (now One Court Square) brought the first major office component to the district of auto shops and crumbling warehouses. Since the start of the decade, two adjacent structures reinforced Court Square as a white-collar destination. The ongoing construction boom is creating a dense residential community upon the streets that, until very recently, emptied out after work hours. Hotels such as the Hyatt bring a third important user type to mingle with the office workers and the residents, helping create the mix that makes for a true, vibrant, round-the-clock urban core.