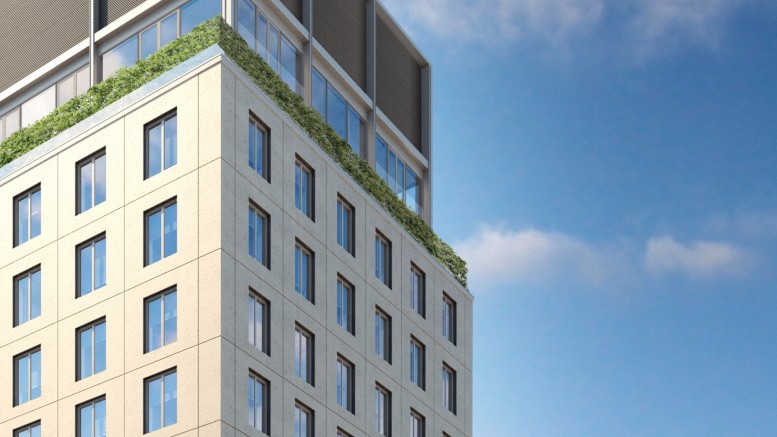 William Macklowe Company is getting ready to start construction and launch sales for its 23-story condo tower at the corner of University Place and East 12th Street in Greenwich Village. YIMBY has the first renderings of the project, which will be known as 21 East 12th Street, courtesy of PR reps.

Annabelle Selldorf Architects are designing the building. They have chosen a simple white, gridded facade that will likely fit in well among the historic buildings on University Place. The project will certainly be an improvement on the large four-story garage that was just demolished here. Bowlmor Lanes used to occupy the garage, which filled most of the block between East 12th and East 13th Streets. The development will reach 308 feet into the air and hold 52 apartments. The condos will be spacious, averaging more than 2,000 square feet each, and feature floor-to-ceiling windows. New building permits were approved last year, and plans appear to have remained the same since they were first filed a year and a half ago. The project will encompass 108,000 square feet of residential space, 13,000 square feet of retail, and a 1,050-square-foot community facility.

The apartments will, of course, be pricey, in line with the luxury market in the Village. One-bedrooms will start at $2.35 million, two-bedrooms at $3.95 million, three-bedrooms at $5.45 million, and four-bedrooms at $8.25 million. The complex will also have a few townhouses and penthouses, in the neighborhood of $10.5 million to more than $15 million. Curbed was the first to write about the renderings. Townhome and terrace at 21 East 12th Street, rendering by Wordsearch