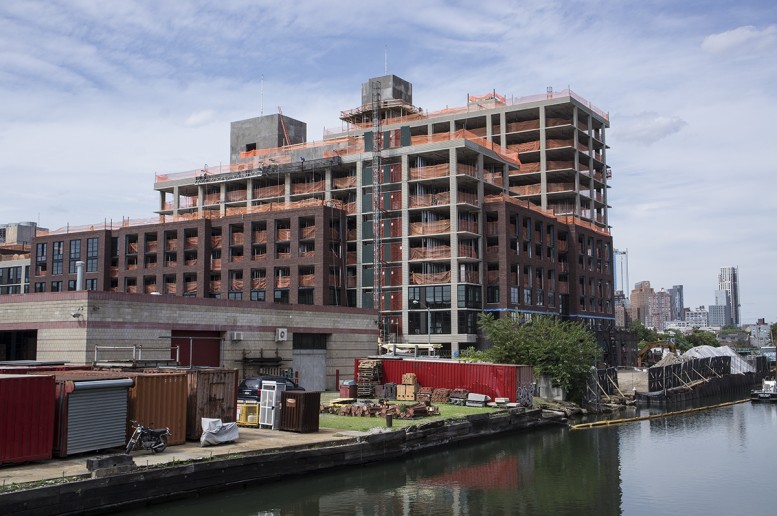 Two years after permits were filed, the first piece of the massive 700-unit rental project at 363-365 Bond Street along the Gowanus Canal is getting its windows and brick facade.

When we last stopped by in April, the structure was only six stories tall and bare concrete. Now it’s nearly topped out, and part of 365 Bond has reached its full height of 12 stories. Ultimately, it will hold 429 apartments spread across 320,736 square feet of residential space, for an average unit of 747 square feet.

Twenty percent of the units, or 140 apartments, will rent at below-market rates. There will also be a 1,240-square-foot commercial component and 1,200 square feet of community facility space. 365 Bond Street, at the corner of 2nd Street

A 193-space garage will take up much of the first floor. The developers, Lightstone, couldn’t built out a cellar because of the project’s flood-prone location along the canal.

Goldstein, Hill and West are designing the complex, and they chose to break up the red brick facade with sections of gray panelling, in order to make the block-long development look like more than one building. The result has been relatively low-key and contextual, fitting in well with Gowanus’ early 20th century industrial buildings. Next door at 363 Bond, workers have laid the foundation for the second 12-story rental building. Permits call for a 250,000-square-foot building with 3,600 square feet of commercial space and 1,000 feet for a community facility. There will be 268 apartments divided across 244,928 square feet of residential space, yielding 913-square-foot units. 365 Bond Street, from the corner of 1st Street