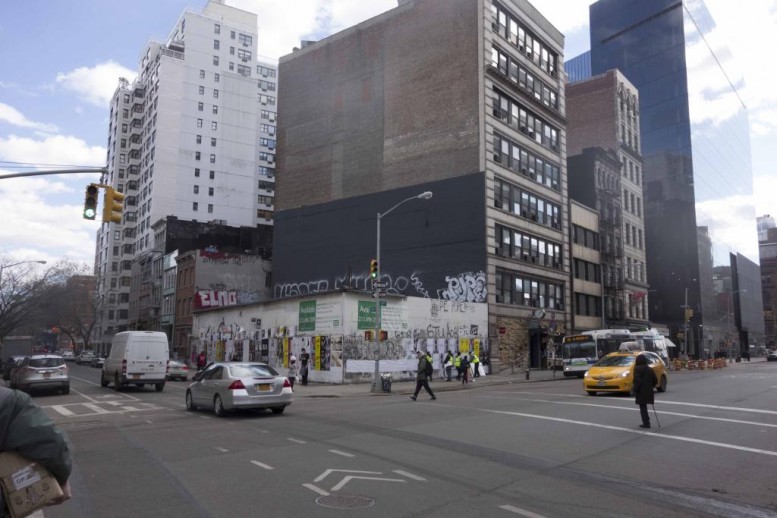 The squat single-story building at the corner of 10th Street and Fourth Avenue in the Village has sat vacant for nearly seven years, after a bodega closed to make way for a hotel that never materialized. The wedge-shaped plot hit the market three years ago for $24,000,000, and now it looks like a new building will finally rise there.

New building applications were filed over the weekend for a 10-story, eight-unit building on the site. The first floor would hold 2,600 square feet of retail, followed by nine stories of apartments. Those eight units would spread across 22,934 square feet, for an incredibly spacious average unit of 2,866 square feet. These will clearly be condos, and expensive ones at that. The Schedule A doesn’t specify, but we expect one apartment per floor with a penthouse duplex on top.

The developer is Nava Companies, who are based a few blocks north in Union Square, and Midtown West-based SBLM Architects applied for the permit.

Plans for a 13-story hotel were filed back in 2008, but the property became mired in an unusual recession-era fraud case. An LLC picked up the lot for $10,000,000 in February 2008 and filed applications in October. That developer took out a mortgage with a firm called FTC Emerging Markets.

The Securities and Exchange Commission charged FTC with stealing tens of millions from their customers “to conceal their prior fraudulent sale of $50 million in non-existent notes to a Venezuelan bank,” according to a press release from 2009. Ultimately, the SEC took over the lot and its mortgage in 2012.

A sale hasn’t hit public records yet, but we’re sure it’s only a matter of time. The development will also include a four-story, turn-of-the-century townhouse around the corner at 82 East 10th Street, according to the new building application.