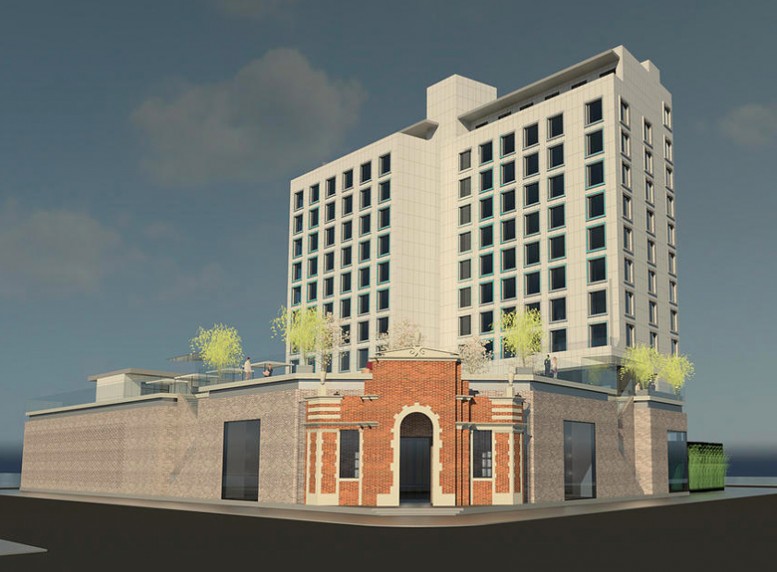 Hotel developers are piling into manufacturing zones from the South Bronx to Bushwick, but the de Blasio administration is considering a ban on hotel development in these areas, particularly in protected industrial business zones (IBZs).

Right now, there are 115 hotels located in M-1 zones, and at least 75 more in the works, according to a study released earlier this year by the Pratt Center for Community Development. Just this week, plans were filed for two different hotels in the East Williamsburg-Bushwick IBZ, which is clustered around active freight tracks and a heavily polluted branch of Newtown Creek.

Hotels can be built as-of-right in manufacturing zones, and they generate bigger profits than any other commercial use, including office development, retail, or bars and restaurants. Chart via the Pratt Center for Community Development

Yesterday, YIMBY sat down with two principals from Millhouse Peck, the developers who are building the Long Island City Dream Hotel, which will rise 13 stories with 199 rooms at 9-03 44th Road. The site is currently home to an interesting single-story warehouse that used to house a cabinet manufacturer, Manhattan Cabinetry. It also sits just inside Long Island City’s Industrial Business Zone, which is split into four areas zoned exclusively for manufacturing and commercial uses near Queensboro Plaza.

They argue that the city’s days as an industrial powerhouse have passed, and hotels in outer-borough manufacturing zones fill an important need for both tourist lodging and event space.

“A lot of these buildings that are demolished to make way for even these limited service hotels are obsolete, and preserving these obsolete buildings isn’t benefitting anybody,” said Eric Gray of Millhouse Peck. “All these great areas on the waterfront just don’t make sense for industrial anymore. It’s much more appealing and attractive to have residential or commercial development than a rusty old warehouse.”

But hotel workers’ unions and some groups, like the Pratt Center, want the city to create a stricter permit process for hotels. If hotel builders had to get a special variance from the Board of Standards and Appeals, community boards and local stakeholders could be involved in the development process, and help prevent out of context construction on blocks with active industrial businesses. They also want to channel more union hotel jobs to the outer boroughs, where most new hotels are nonunion shops.

Leah Archibald, who works to protect 10,000 industrial businesses in North Brooklyn as executive director of Evergreen, pointed to a hotel in East Williamsburg’s manufacturing zone that might suffer because it’s next to a bustling manufacturing operation.

“There’s a hotel going in across from Boar’s Head Foods [on Bogart Street], and they have 600 trucks,” she explained. “They run 24 hours a day, they start loading up their trucks at 4 am. If there was some sort of permit and community oversight process, that would’ve been caught before the pilings struck the ground.”

But even Archibald admits that hotels make sense in certain industrially zoned hoods, like Fourth Avenue in Park Slope and Wythe Avenue in north Williamsburg. Both areas have reliable subway access and bars and restaurants that would benefit from hotels and tourists.

Not surprisingly, developers oppose any measure that would make it even more onerous or expensive to build, including meetings to inform local community boards or the BSA about a planned development.

“If the zoning allows it, then you know it can be done,” explained Gray. “The nice thing about New York City is that every piece of property has a very defined zoning envelope. It’s not like Houston, where I could throw up a 100-story tower next to your house.”

And speculation in areas like the Garment District, Long Island City, and North Williamsburg have driven up rents and asking prices dramatically, giving industrial property owners even stronger incentive to sell or lease to developers.

“Land and buildings in Long Island City are literally twice the price that they were a year ago. It’s insane,” added Joshua Sacks, another principal at Millhouse. “You can’t play the woulda coulda shoulda game in this business.”

Although the city could choose to ban hotels outright in M-1 zones, that seems like a drastic and unlikely possibility. But it might be reasonable to create a special permit or variance process for hotels, which would require developers to give business owners and community groups a heads up on large hotel projects.