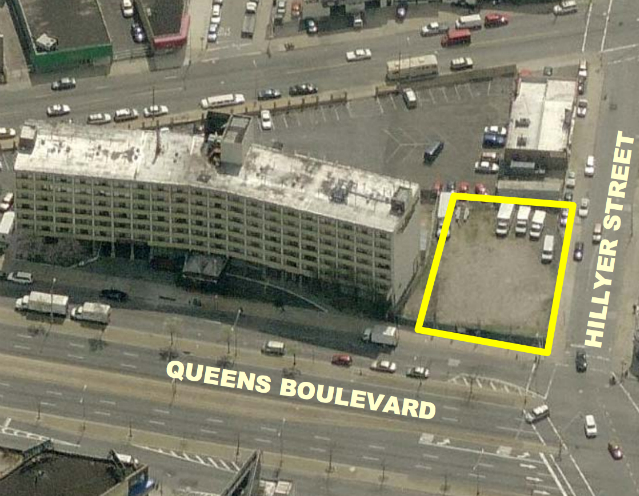 Flushing has traditionally been the central business district for Queens’s Chinese community, attracting not only new housing but also a fair amount of commercial construction, in the form of retail, office space (largely medical), and hotels.

Elmhurst won’t threaten Flushing’s dominance as an ethnic commercial center any time soon, but its growing stature with Asian immigrants and its relative closeness to Manhattan mean that commercial development is becoming increasingly viable, as evidenced by an 11-story mixed-use project planned for 78-06 Queens Boulevard.

The development site, on Hillyer Street right next to the old Pan American Hotel (now, controversially, a homeless shelter), may soon become home to a 94-key hotel topped by 21 apartments, with a restaurant/bar and community facility space on the ground floor, according to a new building permit application submitted to the Department of Buildings on Friday.

The 94 hotel rooms would be placed on the second through eighth floors (spread over 35,000 square feet of commercial space, along with the restaurant/bar), while the ninth, 10th, and 11th floors would each have seven apartments each, for an average unit size of not even 625 square feet – normally indicative of rentals, although Chinese buyers in New York City are often drawn to condos that are far smaller than would be acceptable to others. The ground floor community facility space (likely for doctors’ offices) would measure just under 1,400 square feet.

A garage with 30 parking spaces, exactly the number required by the zoning code, is also planned.

Flushing-based Yan Po Zhu, doing business as Triple East Queens Tower LLC, is listed on the permit application as the developer, while Astoria-based Kambanis Architect filed for the permit.

The development site was purchased in late 2013 for $4.56 million, or $92 per buildable square foot (community facility bonus included).