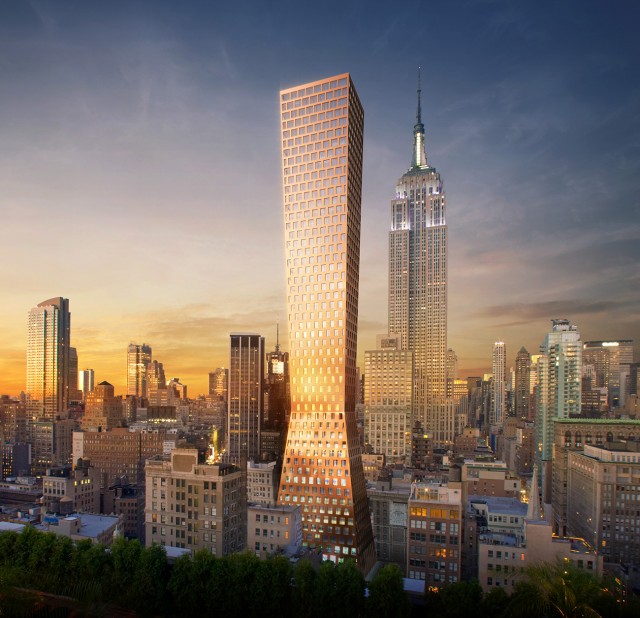 NoMad’s transformation is occurring at a breakneck pace all the way to 30th Street, and HFZ Capital’s project surrounding Collegiate Church may soon become one of the neighborhood’s largest residential towers. The site spans the width of the block, encompassing the former Bancroft Building at 3 West 29th Street, as well as 11 West 29th Street and 8-16 West 30th Street.

Now, YIMBY has the first renderings of a concept proposal for the assemblage, from architecture firm FR-EE. The 400,000-square foot building would be mixed-use, and per the architect,

“The lower levels are allocated to a hotel with a selection of curated upscale restaurants and shops, while the upper levels are reserved for residential, one and two-story apartments.”

A mixed-use configuration would be sensible given the location, and the design optimizes the square footage for that purpose, extruding floor area outward as the tower rises. This maximizes the size of (likely) condominiums on upper floors, which is key to development in a market where height allows for significant price premiums. 45 East 22nd Street has a similar configuration, though that project is entirely condo.

FR-EE’s vision looks to stand approximately 55 stories tall (although it will not be used by HFZ), which would make it one of the largest towers in the neighborhood. Nearby, 15 East 30th Street will stand 830 feet tall, and across the street, another 50+ story tower is slated to rise at 281 Fifth Avenue.

Because the site sits just outside of the Madison Square North Historic District, an adventurous design decision by HFZ will not be subject to the Landmarks Preservation Commission’s veto.

Altogether, that could place three 50+ story towers on an intersection where none currently exist, highlighting the speed at which NoMad is evolving. And while 57th Street’s evolution may be more impressive in terms of sheer height, the street-level changes around NoMad over the past several years have been even more staggering — so it is no surprise to see the neighborhood’s skyline finally catching up to improvements on the ground. Talk about 3 West 29th Street on the YIMBY Forums

IBM Confirmed as Anchor Tenant for One Madison Avenue in Flatiron District, Manhattan