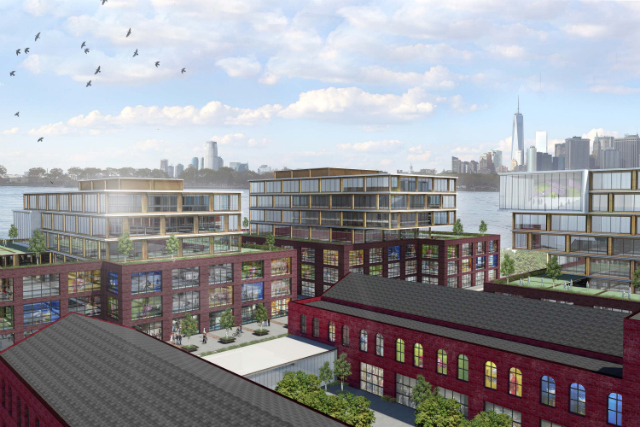 On the Red Hook waterfront, something big is brewing – 1.1 million square feet big.

Since 2012, Est4te Four, the Italian developer behind 160 Imlay, has been quietly buying up large chunks of the Red Hook waterfront. Brownstoner’s Rebecca Baird-Remba reported earlier this month on the company’s 2014 land purchases (totaling $33 million, on top of a $11.8 million full-block site they bought in 2012), and she also spotted plans on the developer’s website to redevelop the site into office space and possibly a hotel (housing, likely to be the most profitable use, is not allowed by zoning).

Now, YIMBY’s got renderings of the massive waterfront commercial complex, which would bring a Manhattan skyscraper’s worth of floor space to an area bounded by Coffey, Ferris, and Wolcott Streets, and New York Harbor.

NBBJ, a global architecture firm, is designing the project, which will, per an email, include 1.1 million square feet of office space within a number of new buildings, plus a waterfront promenade, presumably accessible to the public. The images depict a pair of prewar brick buildings remaining (with the center carved out of what now appears to be used as a single structure), with the less attractive structures (including the New York Daily News’s old printing press) razed. New brick buildings would rise in their stead, topped by glassy extensions.

Because of the vast amount of land involved, the relatively low heights of the new buildings, and the large amount of open space included in the project, it looks like it will be as-of-right, requiring no discretionary approvals. Structures should top-out at around half a dozen stories.

While zoning is not likely a problem, we’re not sure how close the developer is to realizing the project, financially. Office development in Red Hook would be highly speculative, and any such construction in the neighborhood lacks precedent. The site is more than a mile’s walk from the Smith-9th Street F/G station, through a large public housing complex. Anyone trying to develop office space there without space pre-leased to an anchor tenant would be met with skepticism by lenders. But if anyone can pull off such a move – essentially doing with Red Hook what Two Trees did with Dumbo – it would be Est4te Four. The Italian developer has experience with office projects targeting creative companies in London’s Victoria district and in Milan, where they were involved in creating the post-industrial fashion district of Zona Tortona.

And they’re also quite familiar with Red Hook, becoming the neighborhood’s most prominent developer with their 160 Imlay residential conversion, helmed by Adjmi + Andreoli. At that site, they’re in contract to sell studios and one-bedrooms starting a bit below $1 million and penthouses going all the way past $5 million. Not bad for a neighborhood that Life magazine once called “the crack capital of America.”