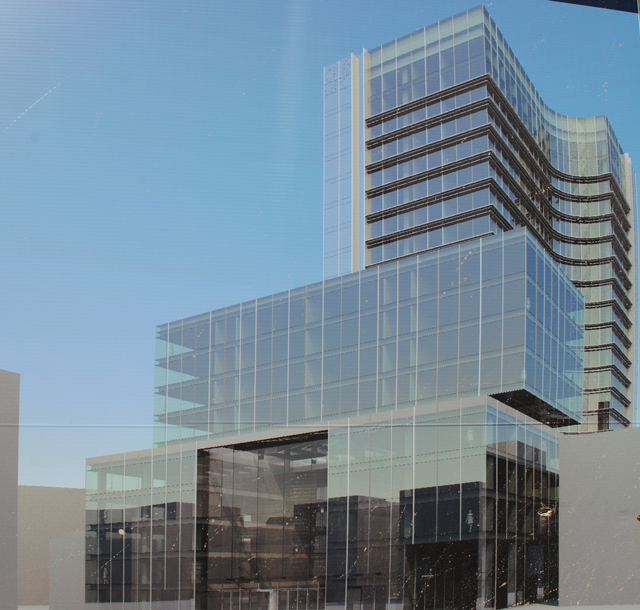 Just outside of the heart of downtown Flushing, a very special mixed-use hotel and medical building has started to rise. A glassy stack of 18 floors of class-A commercial space, the tower is an exceedingly rare instance of a developer asking the city to build less housing and more commercial space than allowed by the zoning code.

The land on which 42-31 Union Street sits, mid-block between Sanford and Franklin Avenues — just to the southeast of Flushing’s central business district — is zoned purely for residential use. In 1998, The Department of City Planning rezoned a large amount of land on the Flushing riverfront, between Roosevelt and Northern, for fairly high density commercial use.

But the demand was not satiated, and developer Richard Xia — of Fleet Financial Group — asked the Board of Standards and Appeals for a variance to build something other than housing on his fairly large plot of land, outside of the rezoned area.

In 2013, the BSA granted the request, allowing Xia to build the Eastern Mirage: a tower made up of a 180-room hotel (he says it’ll be an Element by Westin) and a space dubbed the North Queens Medical Center (which, at least at one point, was set to draw on $17 million in tax-exempt bonds handed out by the EDC as part of the federal stimulus package). The project will have a 300-space public parking garage, a condition of the community board’s approval.

In any other part of the city, nobody in their right mind would ask to swap out residential space for commercial. The Manhattan office market has never fully recovered from the overbuilding of the late ’80s, and residential development has been suppressed all over since the 1961 zoning code, driving prices sky high. New York has adjusted to a perverse real estate reality where housing is almost always the highest and best use of land.

Except, that is, in the heart of the vast area best described as Chinese eastern Queens. Flushing has an intense appetite for new hotel and medical office space catering specifically to a rapidly growing and fairly wealthy new immigrant demographic, and the lust for space cannot be met by the existing pre-war building stock.

While most developers in Flushing will still go with residential space when given the option, land there is more of a toss-up than in other parts of Queens, said Stephen Preuss, a vice-president for sales at Massey Knakal’s Queens office. “If [the option is] hotel or residential, most people go residential,” he told YIMBY. “But you do find these hotel developers that’ll make it work for them,” and the same with builders of medical space.

“New construction saves with their build-outs,” Preuss said of medical users. “They need higher ceilings and customizations, so you’ll see them take bigger blocks in these buildings.”

With the most expensive new housing in Flushing not fetching anywhere near the four-digit prices you can get for a square foot of condo in Manhattan and parts of Brooklyn, office space can occasionally win out. At the Prince Center, a modern office building off Main Street built in 2001, office condos have recently been trading in the $600s to $800s per square foot. A 120,000-square foot chunk of office space at the SkyView Center on College Point Boulevard is on offer for $96 million, or $800 per square foot.

Back on Union Street, work on the Eastern Mirage has reached the fourth floor, and the building will soon tower over its residential neighbors. It will consist of four distinct shapes – two narrow pedestals perpendicular to the street, atop which one larger part will sit parallel to the street, with a taller mass rising behind it to the full 18 stories. Richard Xia’s office would not return YIMBY’s request for an estimated completion date – the mainstream real estate media generally ignores Flushing, and Chinese developers there are more than happy to return the favor – but per on-site signage, it will be finished in the fall of 2015.

The design was apparently done in-house, with Fleet Architects filing for the permits.