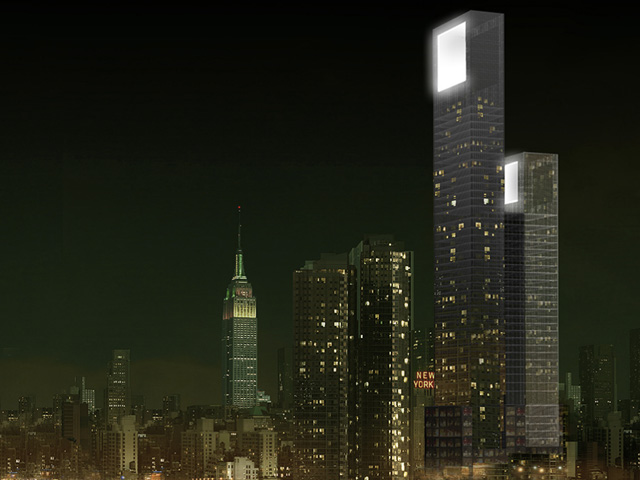 A major site in the Hudson Yards, spanning from 541-545 West 37th Street to 540-544 West 38th Street, has been put back on the market, per a fresh PDF by Massey Knakal. But before developer Joseph Chetrit re-listed the property, he hired Oppenheim Architecture + Design to create a plan for the lot, which is located in the Hudson Yards redevelopment area.

Thanks to a tipster, YIMBY has the reveal for what could have been, which is quite impressive; the site’s air rights total just under 400,000 square feet, allowing for something of significance. In this case, a 50-story mixed-use program was planned, splitting the available FAR rights between 100 residences, 350 hotel rooms, as well as ample amenity space. Ultimate plans could evolve pending the next owner’s additional acquisitions, as the site is located adjacent to the future Hudson Park & Boulevard, in an area where properties are quickly trading hands. Frontage on the future mid-block park will guarantee 540 West 38th Street some prominence, even though the towers to the south will be far larger, with many standing over 1,000 feet tall.

Oppenheim’s concept for the site is nevertheless exciting, presenting the potential for significant improvements compared to the lot’s current occupants, or lack thereof. The massing for the hotel and residential components would split apart as the building rises, ending in two separate parapets, the taller of which would stand 600 feet above the sidewalks below. While the configuration of Chetrit’s assemblage is somewhat oddly shaped, this presents an opportunity for innovation and creativity. If the current neighborhood trend towards consolidation continues, it would not be surprising to see Related or another major company acquire and integrate the parcels into an even larger assemblage.

For now, plans are pending resale.

Talk about 540 West 38th Street on the YIMBY Forums