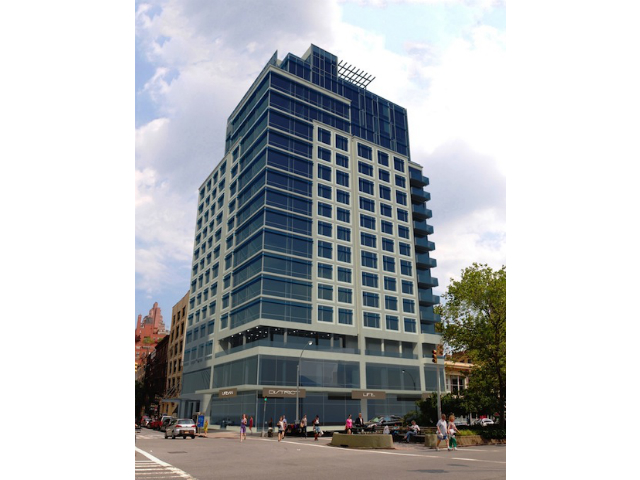 Earlier today, permits were filed for a 14-story building at 2228-2236 Broadway, on the Upper West Side.

It’s hard to know how much of the information on the permit is correct – the total construction area is listed as a too-neat 123,456 square feet, none of the other square footages add up, and the email address of the property owner is not functional. But the permit indicates a 54-unit, 14-story mixed-use building rising to 150 feet at the corner of Broadway and West 80th Street, developed by Rose Associates, and designed by the Stephen B. Jacobs Group.

A rendering obtained by Linda Rosenthal’s office last year, however, depicts a building with a few more stories. We’ve asked the developers for a more current rendering, but have not yet heard back. Overhead shot of 2230 Broadway (to the upper-left of the blue dot), from Bing Maps

A lot size of 10,300 square feet multiplied by a floor area ratio of 10 (as allowed in C4-6A zones) would yield a total net area of 103,000 square feet, or 123,600 square feet if the developers participate in the city’s Inclusionary Housing Program, suggesting that the 123,456-square foot size could be correct. 2230 Broadway lies along a narrow strip of land that is the only part of the Upper West Side along the 70s and 80s not in a landmark district, giving the architect a freer hand when it comes to the project’s design.

The site has been controlled by Friedland Properties since at least the ’70s, according to property records; reached by phone this afternoon, a contact at Friedland said that Rose Associates would be handling development. The two firms also worked together on the Larstrand, an 181-unit rental building a few blocks south.

While the current market would normally push developers in the direction of condos, Friedland usually builds rentals above ground-level retail. The fact that the firm has owned the site for so long — and did not need to compete with condo developers for the land — makes luxury rentals more financially feasible.