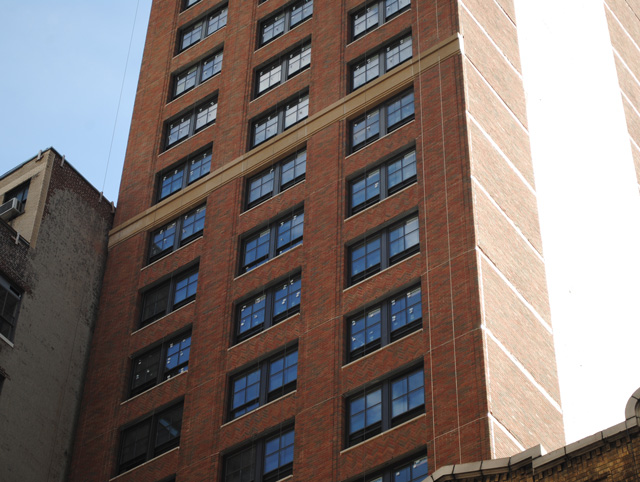 Sliver hotels have been popping up all throughout Chelsea and the Garment District, along with other industrially-zoned neighborhoods in the city. And while we’d still prefer Manhattan’s West Side to be rezoned so that developers can choose to build apartment buildings, which are more attractive and in demand, we’ll admit that 32 West 29th Street has turned out about as well as it could. The building has topped out and reached its full 21 stories and 194 feet, and while work is still ongoing at the top, the NoMad tower has more or less taken its final form and is ready to be judged. Our conclusion?

Aside from the de rigueur street wall-killing set-back (prescribed by zoning) and the PTAC grills (prescribed by financial and possibly regulatory necessity), it could’ve turned out worse. The brown bricks, interspersed with darker ones, lend the façade a bit of gravitas, as do the ornate reliefs below the windows at the base, and the cornices between floor sections higher up. The sides of the building are a bit awkward, with a white stripe (likely housing the core) running up the side, but at least one side will be partially covered when the lot next door is redeveloped. (Not, we hope, into another sliver hotel.)

The designer is Matt Markowitz, whom we thank developer John Sharma for choosing over cheap Manhattan hotel mainstays like Gene Kaufman or Peter Poon. The hotel operator has not been made public.