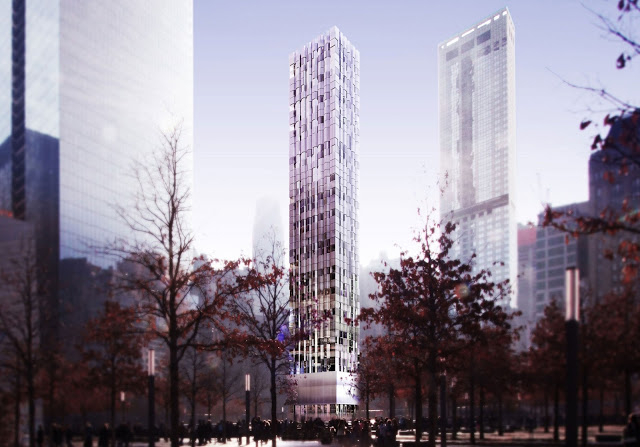 Selldorf Tower, which may or may not have been slated for 111 Washington Street

Renderings of Selldorf Architect’s latest proposal for Lower Manhattan have been released, although there has been some confusion about where–or if–the residential tower will actually get built. Curbed reported that the cutting-edge tower will rise at 22 Thames Street, which the renderings would certainly corroborate, but Selldorf responded to the Curbed posting to indicate that will not be the case.

Several residential towers are set to rise in Lower Manhattan, so perhaps the Selldorf design is for an undisclosed neighboring site. Permits were actually just filed at 111 Washington Street for a 52-story and 578-foot tall building, and although that site already has existing renderings, those are from 2007. The difference in floor counts between the Selldorf design and 111 Washington’s DOB filing is only two floors, so it actually seems possible that the Selldorf Tower will eventuallty rise at 111 Washington rather than 22 Thames Street. The two sites are only a block apart.

Selldorf’s website describes the tower’s features in detail, and they are incredibly innovative. With regards to the facade, “The louvers are controlled by each individual apartment to create privacy and have dual matte and mirrored finishes to reflect or refract light as desired. Functioning as a second skin, the system also provides the environmental benefits of reducing solar gain and creating a stack-effect for natural cooling and heating.”

Whether the skyscraper is eventually built or not remains to be seen, but the concept is very innovative. Extending the functionality of an apartment past its walls is a major step forward, and hopefully more developments in New York City will emulate Selldorf’s proposal.

1 Comment on "The Selldorf Tower: Innovative Residential Skyscraper to Rise in Lower Manhattan?"