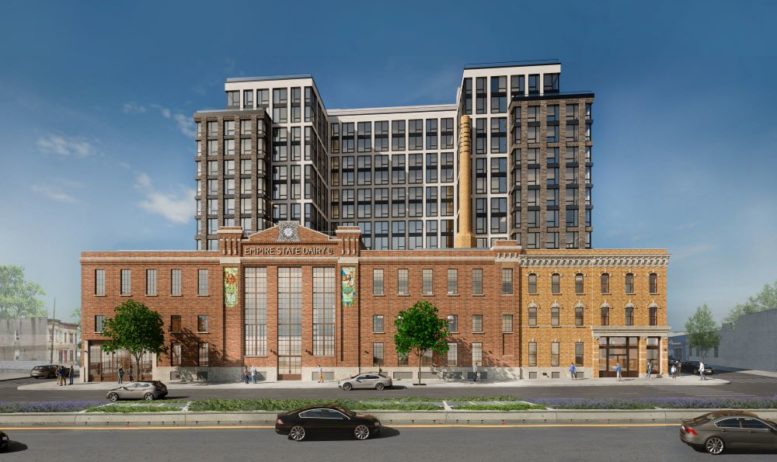 Work has begun on the expansion and redevelopment of the historic Empire State Dairy Company Building at 2840 Atlantic Avenue in East New York. Designed by Dattner Architects and developed by The Moinian Group and Bushburg, the project involves the partial gutting of the existing low-rise building to support a 14-story tower with 320 residential units, 12,000 square feet of ground-floor commercial space, and a new charter school. The entire property will comprise 370,000 square feet.

“Adaptive reuse projects are of paramount importance to maintaining New York City’s history and character,” said Mitchell Moinian, principal of the Moinian Group. “We’re looking forward to our continued work alongside Bushburg and all project partners involved as we continue restoring this special East New York landmark for the community as well as bring an additional and needed housing offering to those currently and prospectively looking to reside in the neighborhood.”

The Empire State Dairy Company Building was originally constructed in 1915 by architects Theobald Engelhardt and Otto Strack. The property served as headquarters for the Empire State Dairy Company until the mid-20th century and was later designated a New York City landmark in 2017 as one of the oldest-standing warehouse facilities in East New York. Bushburg acquired the property just one year later in 2018.

A portion of the new residential units will be designated for affordable housing. Floor plans will range from studios to three-bedroom accommodations. Tenant amenity spaces include a roof-level terrace, two second-floor terraces, co-working space, a fitness center, a communal lounge, a children’s playroom, and on-site parking.

The scope of work also includes the restoration of the historic brick façade, smokestack, and multi-story windows.

According to the project team, the development is on track to debut in January 2024.