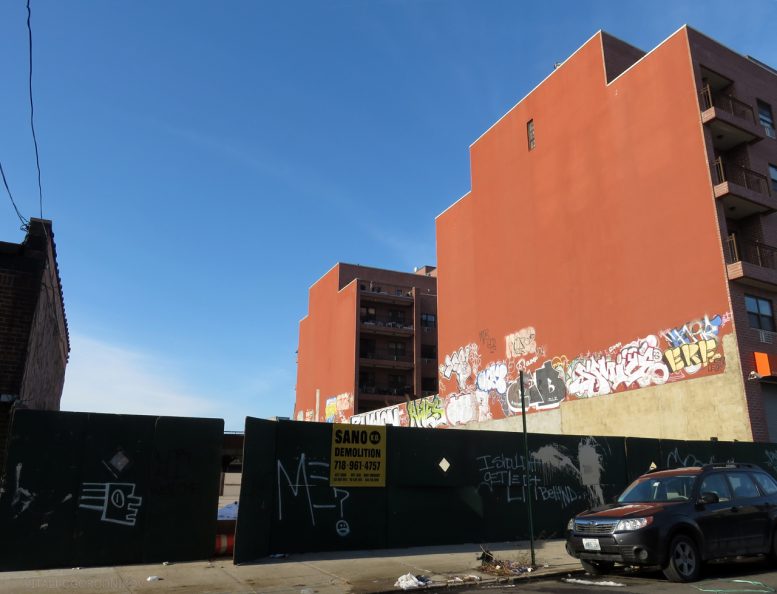 A recently cleared lot at 37-27 31st Street in northeast Long Island City awaits construction of a 61,510-square-foot structure containing a ground-level manufacturing facility, topped by 76 residences stacked in a pair of six- and seven-story towers.

The first project of this kind was the Alma at 37-21 31st Street, which replaced a warehouse in 2012. The Alma’s red, graffiti-covered lot wall runs along the northern edge of the cleared site at 37-29 31st Street, adjacent to the elevated Astoria Line train.

The 16,832-square-foot lot, which has slightly-notched trapezoidal shape, stretches 180 feet across the block to 32nd Street to the east. A single-story podium with a cellar would span the entire property, with the towers massed along either street.

Both sections rise 70 feet from the sidewalk to the roof, yet the west tower on 31st Street contains six stories, while its eastern counterpart on 32nd Street holds seven. This unusual discrepancy stems from varying floor heights, different floor assemblies (the 19-inch floor plates in the west tower are almost twice as thick as those in the east), and extra-tall, fifteen-foot-high ceilings in the western portion of the ground level.

The cellar contains a laundry room and a 37-car, 25-bicycle garage, accessible from 31st Street. According to the Commercial Observer, Abbeys Automate Inc. and The Cosma Family, the owners of two adjacent auto body shops at 37-27 and 37-29 31st Street and 37-26 32nd Street, initially pursued independent sales. Eastern Consolidated convinced the two parties that a consolidated lot would be more lucrative to developers. In 2014, it placed both on the market for a combined $10.35 million. The 31st Street facility was fenced off in the summer of 2016, and torn down by the start of 2017. The building on 32nd Street bit the dust slightly earlier. Looking west towards the elevated train.

Manhattan-based architecture firm Stephen B. Jacobs Group PC filed the first comprehensive permit in December 2015. Gilman Architects New York PLLC is listed as the previous applicant of record. The document notes William Achenbaum as the owner, operating under the project-specific 31/32 LIC LLC. A January 2017 permit upgrades the unit count from 74 to 76. The 10,790-square-foot manufacturing facility opens onto 31st Street. Its central space measures 147 feet long and 69 feet wide at its greatest extent, with four dedicated parking spaces located in the rear. 31st Street also provides access to the residential lobby, which connects to a mail room and a 1,600-square-foot recreation room. A roughly 6,500-square-foot shared deck sits atop the podium roof. The east tower is slightly smaller, measuring 71 feet long and 61 feet wide. Floors two through six each include four 425- to 455-square-foot studios and two 865 and 890 square-foot two-bedroom units. The top floor retains the two-bedroom apartments but swaps the studios for a 1,070 two-bedroom penthouse, with a 760-square-foot private terrace facing the street. Unlike its counterpart, the east tower does not provide a roof deck. This unit count is 72, four less than the latest permit figures, indicating that interior layouts may have been slightly modified.

The surrounding neighborhood has mixed low-scale industrial and residential for over a hundred years, well before the area was designated as an M1-2/R6A residential/manufacturing district. A two-story factory was built on the lot across the street to the east at 37-21 32nd Street in 1898. 37-29 31st Street was first developed in 1936, when a kindling wood facility was erected on its eastern end. A plating works factory rose on the site’s western portion in 1947, and was refashioned into a single-story warehouse in 1953. Since that time, the property was used as a welding equipment warehouse, a lighting factory, a food cart manufacturing/metal shop and a refrigeration facility. Auto shops occupied the buildings prior to their recent demolition. Looking south along 32nd Street. The Long Island City skyline is in the background. The 19th-century factory at 37-21 32nd Street was torn down last year to make way for a seven-story, mixed use complex, stretching between 32nd and 33rd streets and stacking 88 residential units atop 15,887 square feet of retail. Across the street to the east, the property faces 37-14 34th Street, where another seven-story, two-tower, 80-unit complex awaits construction between 33rd and 34th Streets.

37-14 34th Street sits next door to the future site of six-story, 43-apartment 37-29 33rd Street, which would feature ground floor manufacturing space similar to both 37-29 31st Street and the Alma. The three comprise a mini-district containing some of the city’s only new buildings that combine residences and manufacturing under the same roof.

The raised courtyard at 37-29 31st Street would form a continuous space with its counterpart at the Alma. The above-mentioned through-block projects feature similar raised courtyards. Future developments are likely to follow suit, creating a unique communal typology for a rapidly changing neighborhood.