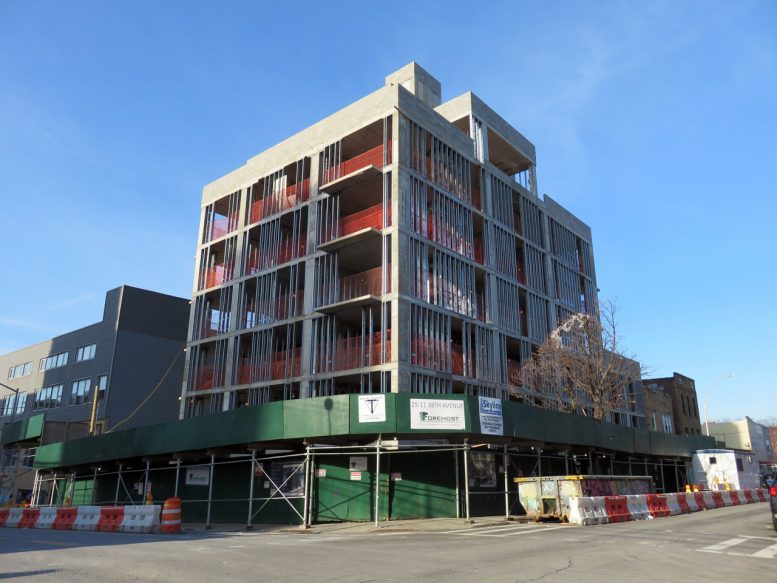 25-11 38th Avenue. Photos by the author unless noted otherwise. The building footprint takes up the entirety of the 7,455-square-foot corner lot, which stretches 85 feet along 38th Avenue to the south and 100 feet along 27th Street to the east. Architect drawings, presented within the Remedial Investigation Report prepared by Galli Engineering, P.C., show the structure rising 70 feet from the sidewalk to the roof, and 84 feet to the top of the elevator bulkhead. The building bulk recedes towards the rear with setbacks on the second, fourth and seventh floors, which serve as large private terraces. Some west- and south-facing units feature balconies. The cellar is set to hold sixteen automobile parking spaces, five of them compact, in addition to a gym for resident use. Manufacturing space spans most of the ground floor, leaving space for bicycle storage, laundry facilities, a mail room and a small lobby serviced by the building’s single elevator. Floors two through seven hold four 400-square-foot studios, 13 one-bedroom units ranging from 501 to 668 square feet, and 10 two-bedroom units measuring 822 to 921 square feet. The building rises slightly higher than the commercial building to the west, allowing for Manhattan skyline panoramas from the top floor. Some details remain uncertain. The original permit, filed in February 2014, calls for 32 units, but the architect website lists 33. Architect drawings, dated November 2013 and included in the April 2014 report, display 27 units. In addition, the drawings show the manufacturing facility at 5,570 square feet, while permits call for a 4,106-square-foot manufacturing space.

Dark vertical panels envelop most of the exterior. The moody color palette, the relatively small number of windows, and steel mesh window shutters combine for a somewhat bunker-like effect. The modernist-industrial aesthetic is fitting for the neighborhood’s manufacturing legacy. Woodgrain-patterned concrete creates a tactile surface at the ground floor, on the low-rise wings, and at the top level. Wooden frames contain floor-to-ceiling ground floor windows, which open into a residential lobby treated with a matching wood-and-concrete theme.

The corner lot previously housed a single-story auto body shop. A two-story rowhome, clad in white vinyl siding, stood next door on 38th Avenue. The two properties share a commercial-industrial history going back at least a century. The first store first opened at the site in 1898; since then, the site has been used for sheet metal fabrication, machinery rental and repair, auto sales, crating and delivery, steel equipment sales, contracting and as offices for various companies. The tenants vacated the premises by mid-2013, and demolition permits were filed in November. The lot was cleared in mid-2014. Excavation started at the end of 2015, and steel rebar reached the second floor by May 2016. Local workshops and warehouses continue to be replaced by an ever-growing number of new projects. While many of the city’s gentrifying neighborhoods are rapidly losing their industrial base, Dutch Kills is noted for its frequent inclusion of light manufacturing facilities alongside residences within new projects. Examples include nearby developments such as the seven-story, 76-unit 37-27 31st Street, the six-story, 43-apartment 37-29 33rd Street, and others. The manufacturing/residential M1-2/R6A zoning designation encourages such combinations. The local development boom is not producing towering skyscrapers akin to those rising to the south at Court Square and Queens Plaza. Still, a couple dozen ongoing projects will transform Dutch Kills into a dense mixed-use neighborhood within a few years. The closest nearby developments include 25-10 38th Avenue, which rises across the street to then south, along with 37-10 and 37-02 Crescent Street, two adjacent projects that near completion a block west.