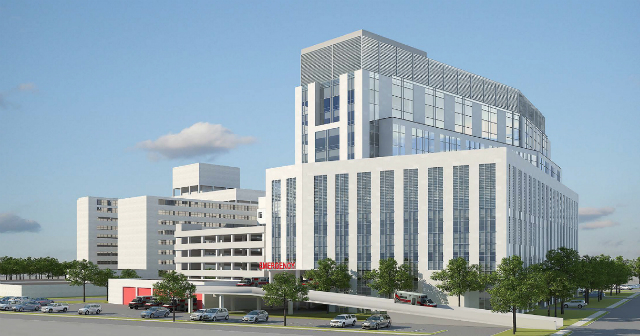 Yesterday, the mayor announced that the Federal Emergency Management Agency will give four New York City hospitals a total of $1.6 billion for capital projects, to repair damage done by Hurricane Sandy and shore up the city’s hospitals for the next storm.

The lion’s share will go to the Coney Island Hospital, with Capital New York reporting:

Of the total, $923 million will be used at Coney Island Hospital. The hospital will build a new resilient critical services building that will house an emergency department on the second floor, and critical medical services such as X-ray, CAT scan, M.R.I., pharmacy and labs. The hospital will also build a new 1,720-foot flood wall that will protect the campus to the level of a 500-year flood.

Bellevue will use $376 million to cover the cost of previous repairs and install removable flood barriers at its two loading dock entrances facing the East River. The money will also pay for a 2,350-foot flood wall, new storm and sanitary drainage pumps and new flood proof elevators for the hospital’s main tower.

The city has yet to determine an architect for the project, but provided an artist’s concept for the new hospital building yesterday when the funding was announced.

Unlike the nearby Shorefront Center for Rehabilitation and Nursing Care, which sits much closer to the water but is elevated above the flood plain, Coney Island Hospital was inundated during Hurricane Sandy and had to be shut down for months. The damage was so bad that six months after the storm, the hospital wasn’t even operating with half the number of beds that it had before.