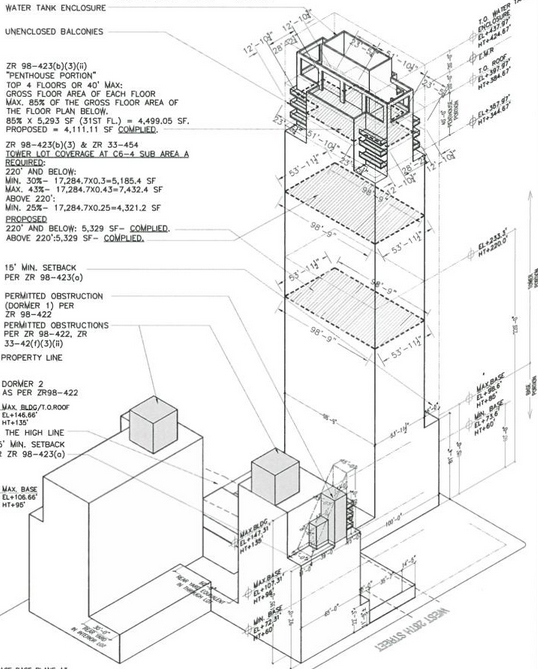 A project with multiple components has been in the works for the site on the southwest side of 10th Avenue and 29th Street for several years, and with the amount of new construction nearby, redevelopment has always seemed to be just around the corner (both literally and figuratively, with the recently-completed Avalon West Chelsea on the same block, The Abington one block to the north, and Zaha Hadid’s building now rising one block south).

Now, we have the first vague visual idea of what’s in store for 319-323 10th Avenue thanks to zoning diagrams from the Department of Buildings, which also reveal that the tallest part of the project will stand 398 feet to its roof. That will make it taller than The Abington, but by the time 323 10th Avenue rises, both buildings will be dwarfed by the Hudson Yards office towers just to the north.

Two additional 13-story buildings will round out the full development, spanning a jagged through-block sliver between 28th and 29th Streets, with the DOB filing’s address given as 507 West 28th Street. Per the Schedule A, the 10th Avenue tower will have 220 apartments, and another 155 will be located in the mid-block structures.

Avinash Malhotra is listed as the architect, and the firm’s recent work includes The Linc in Long Island City, and a similarly-styled rental tower at a slightly higher price point would appear likely for 323 10th Avenue. Lalezarian is the developer and The Real Deal reported on their plans this past September.

Completion is currently expected in 2016, and the project will also include a significant retail component.