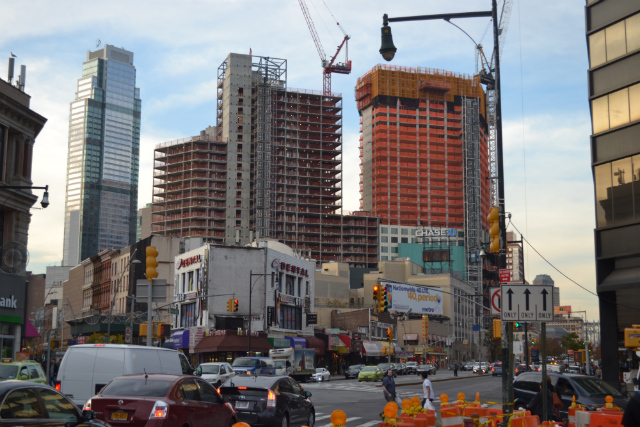 City Point may not have downtown Brooklyn’s tallest tower, but it is definitely the neighborhood’s most impressive construction site, with two massive structures now rising side by side.

While the Cook+Fox-designed towers only number two, the massing gives the appearance of more structures, like a more restrained version of SHoP’s design for Atlantic Yards. The façade has begun to be applied, showing a white surface with vertical bands. Unlike other residential towers going up now in the area – including Avalon Willoughby nearby, and the SHoP-designed Pacific Park (née Atlantic Yards) towers – the face will not be marred by PTAC units, with the developers instead opting for central air.

Today’s construction site is actually just the second phase of the enormous mixed-use project, though it appears to be the largest. The first phase was a relatively small retail building on Fulton Mall, across from the Dime Savings Bank building. Known as One DeKalb, the building is now open, with Armani Exchange as the tenant. One Dekalb, phase I of City Point

This phase will be dominated by retail at the base (which fronts primarily on city straights, rather than internal mall-like circulation), topped by two residential towers (one with 250 units, half of which will be affordable, and the other with 440 market-rate apartments).

The third phase is more tentative, but it’s planned to include 600,000 square feet of residential and – the tricker part – office space.

But once the second phase is complete, City Point will have 700,000 square feet of retail space – equivalent to about two Time Warner Centers. So far, among big national brands, Century 21 and Target have signed on, the latter with its slimmed down urban CityTarget brand. The expanding Austin-based movie theater chain, Alamo Drafthouse Cinemas, is also taking space at City Point.

The Brodsky Organization is developing the taller tower, and BFC Partners is responsible for the shorter one.