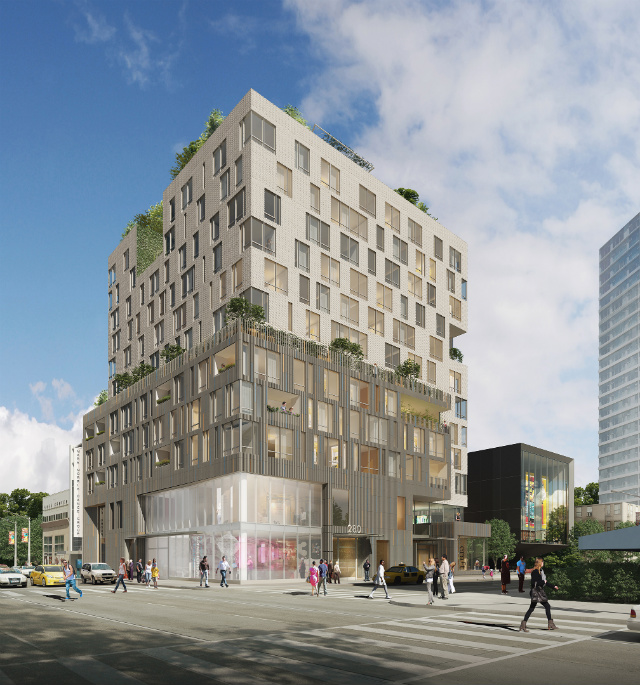 Two Trees’ BAM South tower is the most prominent building set to rise in downtown Brooklyn’s would-be cultural district, just north of the Pacific Park (née Atlantic Yards) redevelopment. But north of BAM South another tower has floated somewhat under the radar: 15 Lafayette Avenue, on the north side of the street.

The building will be branded as BCD:A, an abbreviation for the Brooklyn Cultural District Apartments, a representative from the Jonathan Rose Companies told YIMBY. According to the new building permit, filed yesterday, the 12-story, 120,000-square foot mid-rise will contain 116 apartments, and will rise 137 feet. As previously reported, 40 percent of those units will be let at below-market rates, while 60 percent will have rents set by the market. The 116 apartments will be divided among 82,000 square feet of net residential space.

The programming for the 19,000-square foot community facility spaces has changed since the project was unveiled, though we’re told it will still be occupied by a “cultural non-profit.” The permit indicates 19,000 square feet of such community space, plus nearly 2,800 square feet of retail space on the ground floor. Dattner Architects is the lead designer, and Bernheimer Architecture is the associate architect; SCAPE/Landscape Architecture is also assisting. The Rose Companies-led team was selected by the New York City Department of Housing Preservation and Development, and ground is set to be broken next year.

Talk about 15 Lafayette Avenue on the YIMBY Forums