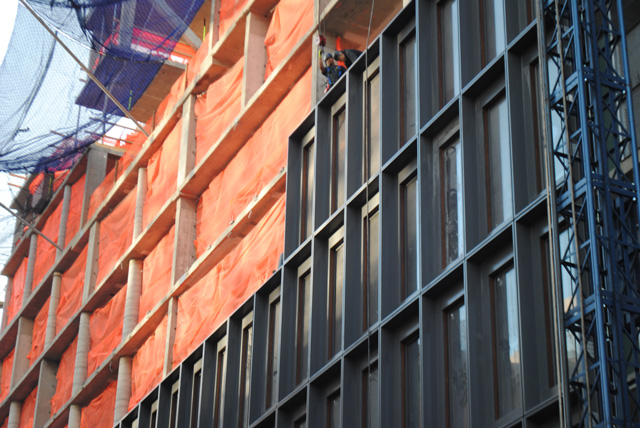 When we last checked in on 15 Renwick Street, a project under construction in the southwestern corner of Hudson Square, the building had nearly topped out.

In the two months since the last update, the façade and windows have started going up, and have reached the sixth floor. While the units aren’t set to be delivered until 2015, we’d bet that the face of the structure will be substantially complete by the end of the year. The 11-story building was designed by Eran Chen’s ODA, and is one of the more staid permutations of the architect’s boxy style.

Chen described the design thusly in an email to YIMBY:

The façade is a tapestry of single operable windows, 8 feet by 4 feet each, framed by deep metal with wood-like trims, depicting the vernacular of the old cast iron buildings in neighborhood SoHo and Tribeca, which connects us to our past. As the building grows upwards, the windows separate and break free against the skyline, celebrating our individualism and our future. The developer of the building is IGI-USA, and they’re building 30 condos, with an average size of over 2,000 square feet.

The building is part of a broader trend towards a more residential Hudson Square, and is part of an early wave of housing enabled by a small rezoning in 2003. The tidal wave of growth is just beginning, as the rest of the neighborhood – south of the West Village, west of SoHo and north of Tribeca – was only rezoned last year.