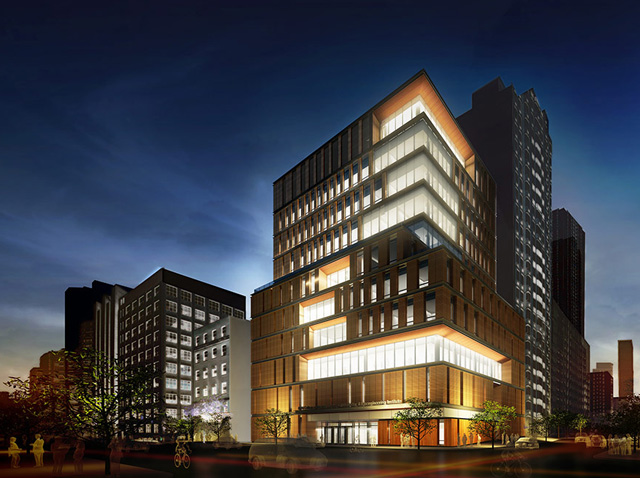 Renderings have been posted for NYU’s new facility at 433 First Avenue; the building will soon be home to both the NYU College of Nursing, and a portion of the University’s College of Dentistry. Per DOB filings, the architect of record is EYP, though KPF appears to have led the project’s design. Aesthetically, 433 First Avenue will be a boon to the surrounding neighborhood, which has long been a warren of architectural neglect. The vicinity is dominated by dated towers and decrepit pre-war buildings, and the contrast presented by KPF’s creation will be a refreshing break from the developments that typify Kips Bay, which is a relative no-man’s-land, wedged between Midtown and Peter Cooper Village. 433 First Avenue’s facade will be glass and terra cotta, offering another example of the historic material’s recent comeback in New York City, where its usage is gaining significant visibility — perhaps most prominently at SHoP’s future 111 West 57th Street. Besides integrating classic materials, the scheme for 433 First Avenue is decidedly contemporary, which is an obvious necessity given NYU’s position as a leading global academic institution. Large windows will allow ample light, and cut-outs will add variety and depth to the facade; the influx of additional students will also benefit the neighborhood’s pedestrian scene. Completion of 433 First Avenue is expected later this year.