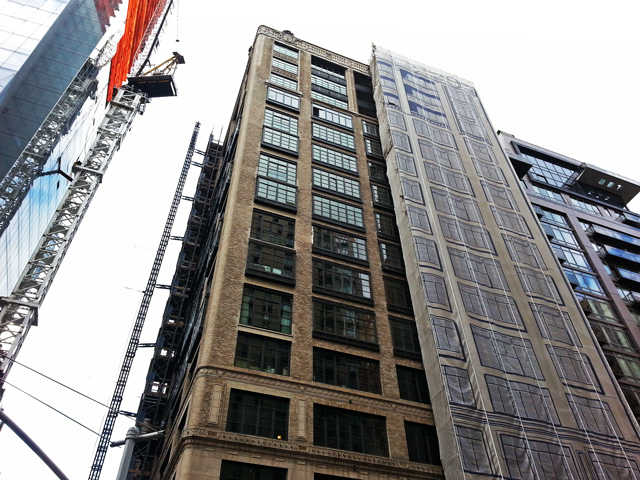 The redevelopment of 404 Park Avenue South — aka ‘Huys‘ — is nearing completion, and the first of the building’s decorative netting has been removed, revealing significant improvements to the underlying structure. Helmed by Piet Boon, the renovation transformed the tower into a set of 58 residences; the developer is Kroonenberg Groep.

Curbed reported that within Huys, the penthouses are asking between $6.75 and $10.5 million, and range in size from 2,400 to over 3,000 square feet. Permits indicate the entirety of the project measures 107,662  square feet, including a 5,130 square foot commercial component on the first floor. While exterior changes have been focused on relatively minor details, the collective shift has given 404 Park Avenue South a whole new look; some windows bulge out of the brick facade, while others are inset within. The contemporary accents help to differentiate Huys from similar pre-war conversions in the neighborhood, and also enhance the contrast with 400 Park Avenue South, which stands directly across 28th Street. Together, the projects represent the best of both kinds of development, with their architecture quality warranted by the rapidly rising cache of the part-NoMAD and part-Gramercy locale. The southern reaches of Park Avenue South have rapidly developed into a desirable neighborhood, with the rise of NoMAD a primary contributing factor.

Completion of 404 Park Avenue South is expected this year.