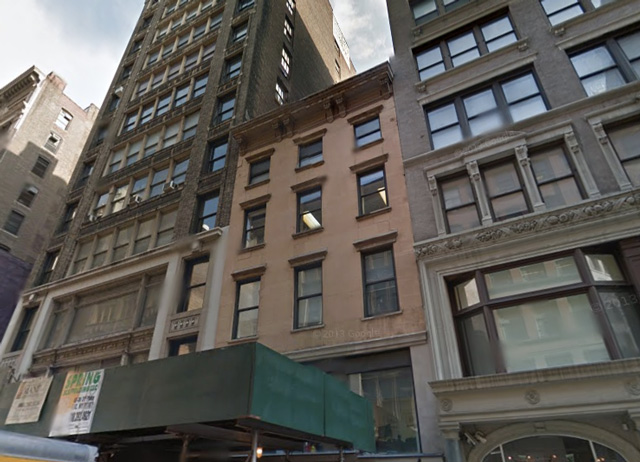 Plans for an 18-story hotel at 17 West 24th Street are evidently making progress, after demolition permits for the site’s existing structure were filed last week. Previous filings from 2012 indicated that Kaufman would be the project’s architect, and Suzuki Capital LLC is developing the project.

While much of Chelsea’s nicer pre-war stock is getting demolished, this won’t be the case at 17 West 24th Street; the current/former building is a five-story tenement with a salmon-toned facade, and its removal will be no great loss to the neighborhood. Indeed, the latest Kaufman addition may actually be an improvement — which speaks to how quickly West 24th Street is developing, and the fact that so many derelict and under-utilized sites remain.

Permits for the new hotel were rejected after the initial filing two years ago; the small scope of 17 West 24th Street limits what any developer can build, because the lot is so narrow.

Eventual plans are likely to be similar to Kaufman’s initial design, which would have had 68 rooms spread over 18 floors, and contained 25,000 square feet in total. That would likely place the development in the ’boutique’ category, which would be a natural fit for the building’s increasingly upscale NoMAD surroundings. No completion date has been announced.