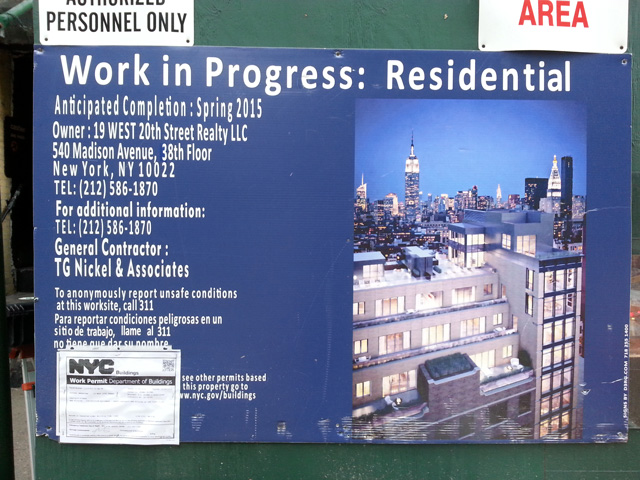 A new 15-story residential building is under construction at 21 West 20th Street; the project’s developer is Gale International, and the architect of record is Beyer Blinder Belle. Permits were just approved on the 10th, and excavation is already well underway. The development will be a combination of old and new; the bulk of the project will be contained in a new building at 19 West 20th Street, but the upper floors will extend over an existing building, at 21 West 20th. The interiors of the penthouse will measure nearly 7,000 square feet, with an additional 2,700 square feet of exterior space; the unit will span three floors in total, from 13 to 15, and is listed at $35 million.

In total, the development will have approximately 35,000 square feet of space, with thirteen residences; they will average nearly 3,000 square feet each, and the project definitely falls into the ‘luxury’ category, with asking prices at the other two penthouses north of $10 million. Aesthetically, 21 West 20th Street will be contextual with its historic surrounds; on-site renderings only depict the upper portions of the development, but the structure will maintain the existing street-wall for the entirety of its height, and the facade will be brick. Completion is anticipated in the spring of 2015.