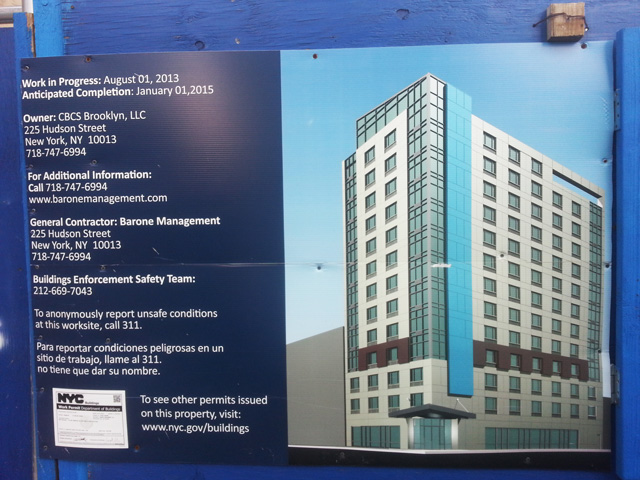 Two new hotels are rising within a block of each other in Downtown Brooklyn, at 40 Nevins and 300 Schermerhorn Street. The new buildings are located just a short walk from the Barclay’s Center, and the hotels’ proximity to the arena is certainly a partial explanation for the mini-boom. Besides the commonality of location, the projects also share the same architect of record: Kaufman.

40 Nevins is being developed by CBCS Equities and Barone Management, and per Barone’s website, it will stand 13 stories and hold 204 hotel rooms. No hospitality partner has committed to the project, though excavation is nearly complete and foundation work is already underway. Renderings depict a fairly standard box-like building, which will enhance the pedestrian experience with a solid street-wall presence; while its format will be urban, the cladding appears to be budget-minded. Given its relatively short size, 40 Nevins won’t make an impact on the skyline – and will barely be visible – so the facade issue is minor. 300 Schermerhorn’s developer is the Mehta Family, and it will be a similar size to 40 Nevins, standing 14 stories and holding 247 rooms. Holiday Inn will be the hotel partner, and the posted design is relatively mundane, but to be expected. The cladding will be drab, and the design’s ‘flourish’ – an out-of-place crown that will rest on a sliver of the roof – is, at best, a meek attempt at creativity. Nevertheless, as with 40 Nevins, the project’s size is relatively minor, ensuring it won’t detract from the skyline. Foundations have already made major progress at 300 Schermerhorn, and it should be rising above ground shortly. Given the influx of hotel guests – with over 400 rooms between the two projects – the new developments will contribute to the neighborhood’s pedestrian vibrancy. Barclay’s has initiated a major transition, and a wave of construction is now sweeping the vicinity, but outside of peak event times, the area’s human presence is still lacking – which is something that 40 Nevins and 300 Schermerhorn will help to fix. Completion of both projects is expected in 2014.