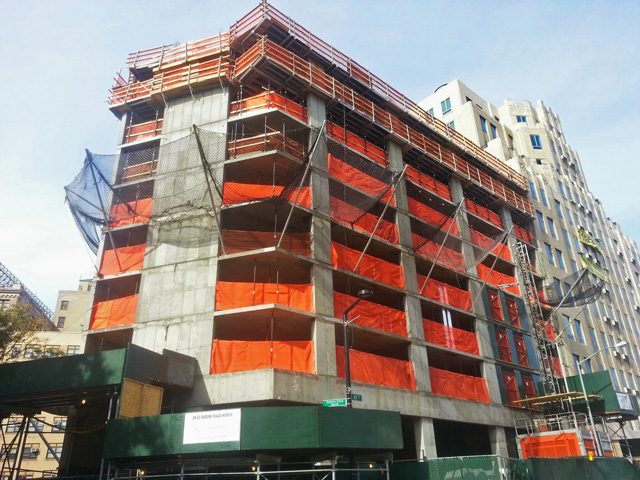 Located on the northern end of the Dutch Kills Green, the hotel is close to transit options, making it viable for budget-minded tourists who desire proximity to Manhattan. At 150 feet in height, the building will be far from prominent, though it will be semi-visible given its under-developed location. The design is not clear, as the posted drawing offers no real perspective on the project or its surroundings. Nevertheless, it appears the building will have an intact street-wall, which is a pleasant surprise, and bodes well for the neighborhood’s nascent urbanity.

Affordable hotels are an obvious necessity for the continued growth of tourism in New York City, and Long Island City is the perfect place for such development. Next door to the Hilton Garden Inn, a new 31-story Marriott at 29-07 Queens Plaza North is also under construction, and foundation work is already underway. Unlike the Hilton Garden Inn, the new Marriott has an actual rendering, though it appears to be a low-res image. Despite the lack of clarity, the design looks pleasantly restrained, and the hotel will become the tallest building in the immediate vicinity. Handel is the architect of record, and it will have 160 hotel rooms on lower floors, with 135 residences on top. Combined with the new Hilton, the projects will deliver over 300 new rooms, further revitalizing Court Square and its surroundings with actual humans.