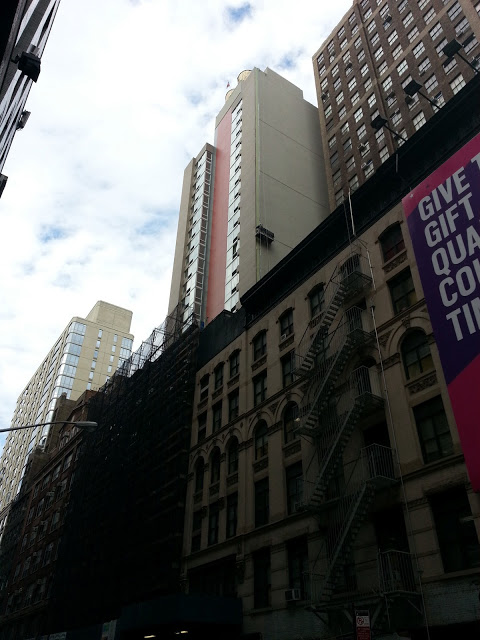 Peter Poon’s new hotel at 307 West 37th Street has been unveiled, and it’s his most hideous piece of work to date. The building’s short height diminishes the impact of its ugliness on the skyline, but expectations from the last post on the project did not disappoint. It will eventually house a Courtyard by Marriott.

Besides the lack of windows, the front of the building is bifurcated by what appears to be an enormous fruit roll-up. Netting remains along the base, but that will undoubtedly be a continuation of the heinousness.
Gene Kaufman’s 312 West 37th is now topped-out across the street, but facade installation has not yet begun. It actually doesn’t seem like it will be that bad, barring a terrible facade like the new Courtyard–at least Kaufman was kind enough to keep the street wall intact. 312 West 37th will eventually be a Homewood Suites, by Hilton.

Expanding New York City’s supply of hotel rooms is definitely a good thing, but do new projects have to look so ugly? Buildings like Via Verde in The Bronx prove that low-cost buildings don’t have to be ugly, and can actually be quite beautiful. The sacrifice of aesthetics for the bottom line can only continue for so much longer; horrible buildings are slowly beginning to define the character of the Garment District.