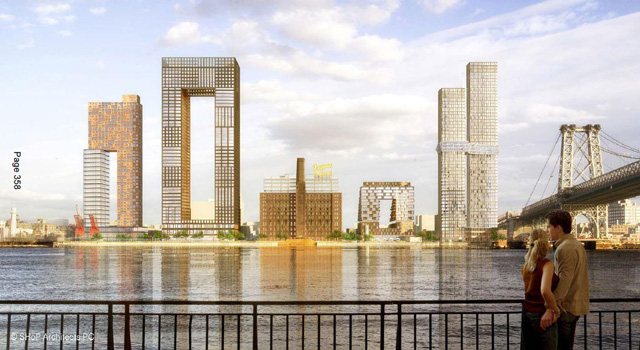 New renderings have been revealed in an Environmental Impact Statement for Two Trees‘ Domino Redevelopment in Williamsburg, which will bring dramatic changes to the Williamsburg waterfront. The project is enduring the Uniform Land Use Review Procedure for a second time after Vinoly’s vision was tabled and the site traded hands; approval for the new SHoP-designed proposal seems likely, although several steps remain before construction can begin.

SHoP has several major projects in the works, but the firm’s plans for Domino will be especially high-impact. The site will have five structures overall, and each of the buildings will feature components arranged in creative ways; besides the old factory, which will be renovated and expanded, the actual towers will push and re-define new development in New York City. Domino’s skyscrapers will vary in height; the factory’s addition will bring it to 16 floors, and the shortest of the new buildings will stand 17 stories. All of the other towers will be over 40 floors, with the tallest — within ‘Site D’ — rising 565 feet. The entirety of the project will add over three million square feet of mixed-use space to the Williamsburg waterfront, with the bulk of the development dedicated to residential. Changes between the SHoP and Vinoly’s plans include a small decrease in housing units, and a major increase in office space; the revised scope calls for 2,282 apartments, and approximately 500,000 square feet of offices, in addition to 115,000 square feet that will be dedicated to retail and a health club. SHoP’s vision is a major improvement compared to the previous scheme, reducing parking by 644 spots, and adding an additional two acres of open space. Besides its better layout, the aesthetics and creativity of SHoP’s plan will be additional draws; for the first time, Brooklyn will have buildings on its skyline that are distinct and iconic.

The full plan’s build-out is unlikely until the 2020s, but once ULURP is completed, construction on the first 42-story residential tower can begin.