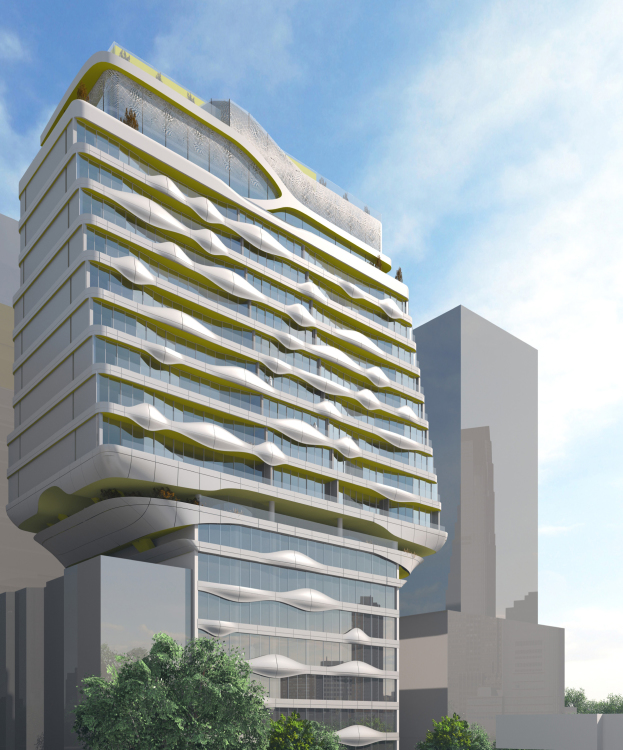 Back in November of 2013, YIMBY revealed the first images of HAP’s plans for 215 West 28th Street. The site is located mid-block between 7th and 8th Avenues in Chelsea, and offers ample development rights, so much so that it will cantilever over both of its low-rise neighbors.

HAP appears to be considering a redesign for the project, however, and YIMBY has come across a design for the site by Karim Rashid, though we cannot confirm that it is the final version that they intend to build. True to form, the architect and designer has delivered a futuristic interpretation of what was an already contemporarily-minded project.

While Rashid’s design aesthetic is among the most controversial among current architects designing new buildings, his visions are more creative than most, and their unique flair comes at price-points that are not obscene. Pushing average new development beyond the staid glass box is something most everyone seems to eagerly anticipate, especially as technology allows for increasingly unconventional building forms, but New York City’s zoning rarely accommodates opportunities for large-scale vertical innovation. The pulsating facade of the future 215 West 28th Street lends itself to an organic appearance that appears futuristic, but not cold. An obvious nearby comparison is Related’s new building rising at 520 West 28th Street, designed by Zaha Hadid. While swooping accents help elevate that project, it is firmly anchored to the ground; Rashid’s tower gradually spills over the tops of neighboring low-rises, and it almost feels as if it would be home in New New York, where Matt Groening would be Mayor.

Despite the similarities between the two condo projects, the buildings are clearly distinct, and that will be most obvious when it comes to price-points. HAP typically targets the mid to luxury end of the condo market, while prices at 520 West 28th Street will be stratospheric.

And ultimately, whether those numbers are justified will be put to the test by competing product like 215 West 28th Street. With a location significantly closer to multiple transit options and a price-point that likely won’t be astronomical, HAP has an opportunity to prove that eccentric design does not have to cost a minimum of $4.6 million per unit.

No firm completion date for the site has been announced, but permits were first filed for a 23-story and 127,000-square foot tower back in 2012. While HAP has not confirmed that Karim Rashid will be designing 215 West 28th Street, what would seem to be the current stage of the project will stand 21 stories tall and hold 100 units, while also including 7,000 square feet of commercial space along the ground level.