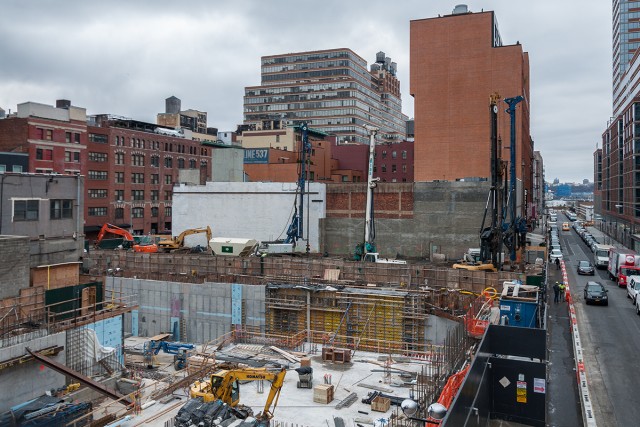 While real estate along the High Line has seemed to be in a perpetual boom, construction adjacent to New York City’s first elevated park is now more active than ever, especially along its northern end. Its southern reaches have seen a smattering of development over the past decade, both residential and commercial, and the current condo-heavy spate of activity should not be surprising given extreme and unmet residential demand across Manhattan. 520 West 28th Street may be better known as Zaha Hadid’s first contribution to New York’s architectural vernacular, and Related is the developer. The project is perhaps the most famous of the bunch currently rising along the High Line, and for good reason; its futuristic curves recall a bygone era, pre-2008, when fantastical visions of starchitecture dominated new development along the park. The best examples are Nouvel’s “Vision Machine” at 100 Eleventh Avenue, and Gehry’s IAC Building, at 550 West 18th Street.

These kinds of projects fell by the wayside with the Great Recession, and a more conservative aesthetic briefly reigned supreme, shunning the extreme forms of Nouvel and Gehry for more contextual but equally elegant designs by Cary Tamarkin, Thomas Juul-Hansen, and Norman Foster. Work is now wrapping up on each of those projects — at 508 West 24th Street, 505 West 19th Street, and 551 West 21st Street, respectively — and yielding to another wave of futuristic architecture, this time led by Zaha Hadid. Progress on 520 West 28th Street has been swift, and foundation work appears to be wrapping up. And next door, work is also starting at 527 West 27th Street, which will span through to 530 West 28th Street and rise in the format of two separate buildings, dubbed “Jardim”. New diagrams posted to the construction fencing illuminate the configuration (but not the actual design), and the project will total 36 units. While that site awaits excavation and a firm completion date, Hadid’s 39-unit building has already begun sales. Per The Real Deal, prices start at $4.6 million, and reach $35 million for a 6,391 square-foot penthouse that also includes a terrace of over 2,000 square feet, and an additional 334 square feet of private balconies. 520 West 28th Street is expected to open in 2016.