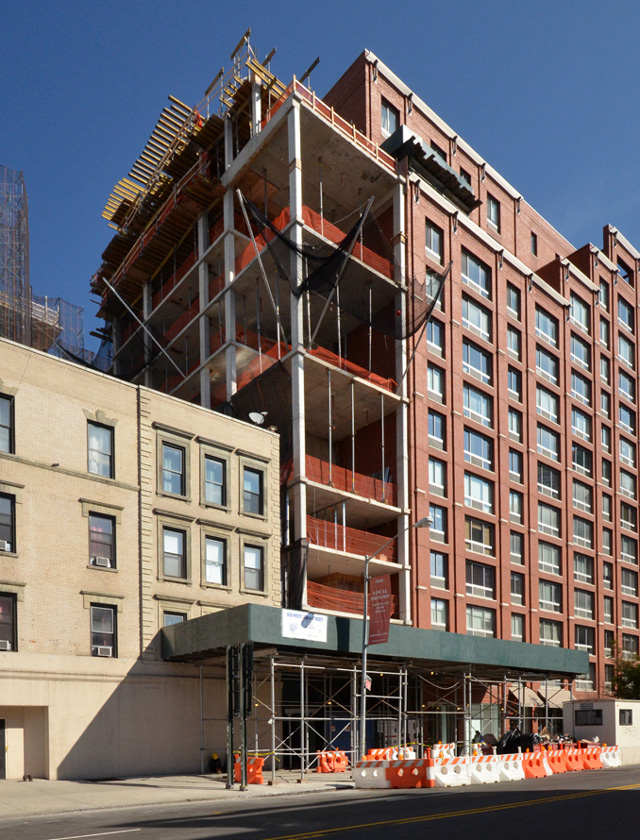 This past February, YIMBY posted the first renderings for a new residential building rising at 559 West 23rd Street, as well as some construction photos. Things have changed significantly since then, and what was once an empty pit with a trickle of concrete is now a full-fledged building, and the project has nearly topped-out, with the latest photo sent along by Tectonic.

559 West 23rd Street will fall definitively within the ’boutique’ category of new construction, containing only eight units. The building stands 13 floors tall, and residences will be quite large, averaging approximately 2,500 square feet apiece.

The rendering did not show the double-height living rooms apparent in the construction shot, which span the project’s 23rd Street-facing side. Besides that feature, the development already blends into the surrounds, and it will stand the same height as its neighbor, while also enhancing the street-wall with a built envelope that’s flush with the sidewalk. NBO4 Architecture is listed on permits as both the developer and the architect, and while more illuminating renderings remain elusive, completion is already around the corner. 559 West 23rd Street is expected to open in the spring of 2015.